The cast of Casualty and Holby City join forces in this special four-part Halloween story.

It’s Halloween, and paramedics Josh, Comfort, Woody and Luke are giving a demonstration at Farmead, a failing school.

Young teacher Nick Bond oversees a boisterous class full of kids – excited about an up and coming Halloween party. It’s a reward from valiant head teacher Carl for their improving behaviour.

Carl pulls Nick aside to inform him that he has to leave: he was going to give him until the end of term, but now he wants him to go by the end of the week. When Comfort finds Nick and a pretty pupil, Emma, looking intimate in a classroom, we realise why.

As the party begins, schoolboy Adrian persuades Emma to bob for apples – but someone has put acid in the water and she and her best friend Shania are badly burned. Emma calls out for Nick, and her unstable boyfriend Kris realises that the rumours about her and the teacher are true.

As the paramedics battle to save Shania’s life, Josh’s patience with these unruly kids snaps and he lashes out at a boy who has stumbled into him. Woody is not happy about the incident.

Ambulances arrive and take Emma and Shania to hospital. As the paramedics are preparing to drive their demo ambulance back to base, an injured Nick runs up to them, chased by Kris and his friends. The boys scatter as Carl calls the police, and Comfort and Luke pull Nick away from his attackers and into their ambulance.

But as they reach the school gates, Kris and his mates hijack the ambulance, throwing Luke out of it and screeching off, with Comfort and Nick still trapped inside.

Meanwhile back at Holby, the staff in the ED deal with a man, Connor, who has swallowed a sword. He has come in with a woman, Charlotte, who Abs discovers is his support worker. Abs is not sympathetic when she claims he had been trying to impress her and that she seems more concerned about losing her job.

* Charlotte Marsh – falls on a pumpkin in reception, injuring leg.

* No Holby City cast appear in this episode.

* Kelsey is told off by Tess for putting a pumpkin in reception claiming it to be a safety hazard. However when she takes it away, she drops it on the floor. Whilst getting something to clear it up – Care Worker Charlotte slips on the pumpkin and ends up a patient.

* Harry asks Kelsey to get on to Thoracics regarding Connor’s injuries. ‘And ask for who – King Arthur?’ retorts Kelsey.

* Josh is shocked at the pupils’ behaviour at the school. ‘It wasn’t like this in my day,’ says Josh. ‘Well it wasn’t like that in the dark ages!’ adds Comfort.

* Children at the school are keen to get autographs from ex-footie star Luke Warren. 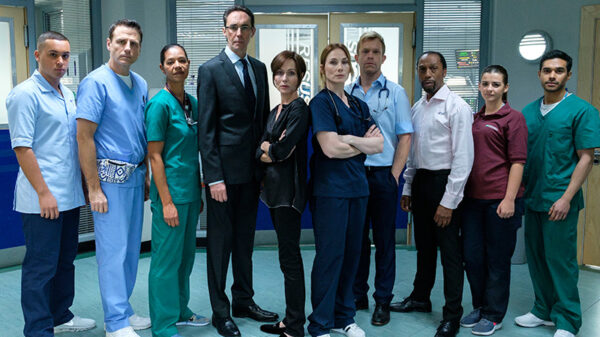