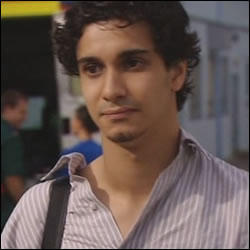 Returning from London without Harry, Guppy is lacking in confidence and feeling depressed. His train is cancelled because someone has pulled the emergency alarm, so he ends up waiting on a deserted platform. While waiting, he notices a child’s ball falls onto the train track. The child runs after it and gets his arm stuck. Guppy has to act instinctively and in doing so saves the boy’s life.Back at ED, Guppy investigates further. His diagnosis and subsequent life-saving treatment is praised by everyone and Maggie tries to persuade Guppy to stay, but he has made up his mind and says a quiet goodbye, leaving ED for good.

Meanwhile, Toby experiences the first death in his care. An elderly lady, Romaine (who was a passenger on the train that was stopped), has chest pains. Toby takes the lead in Romaine’s treatment, and gets close to the her as she deliriously declares the train driver to be her long-lost son. The driver insists they aren’t related, but sits with her so she isn’t alone. When she dies, Toby is devastated.Elsewhere, Charlie meets Devika and Sajani, and discovers they are Josh’s visitors. He questions Devika’s motives on learning that Josh has given them his compensation money. Josh is furious at Charlie’s suspicion.

Harry returns and announces to the shocked department that he is back as the new Consultant Manager. Nathan is horrified – Harry will be his new boss.