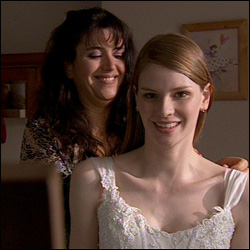 An armed Curtis arrives at Tony’s but is shocked to find he has been murdered, in the first episode of a two-part story. Realising he will be the prime suspect, Curtis runs from the scene but is spotted by a witness. Alice agrees to go on the run with him but, as the pair try to escape, Curtis accidentally injures one of DI Moreland’s officers. He stays to stabilise her but flees before the police can arrest him. Now, the stakes are even higher.

Back at the Emergency Department (ED), meanwhile, Jessica is thrilled at confirmation that Adam is Harry’s father but furious when she discovers Adam has called Sean to make peace for the sake of Amelia and Lucas – she just can’t forgive Sean for taking her children.

Elsewhere, Big Mac and Noel gather Farmead volunteers and bundle them on to a coach headed for the ED, as they prepare to rehearse for a big terrorist attack. However, a speeding car doesn’t see the coach and causes an accident.

It’s Jordan’s last day, but his plans to make a swift exit are disrupted and he accidentally costs Adam the post of clinical lead. Jordan also finds Zoe and, as they say their farewells, it’s clear there is still something between them. However, before Jordan can leave, he is called back into the ED when the coach crash causes chaos.