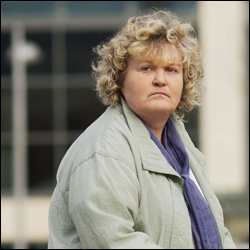 Adam takes a big step towards recovering from Harry’s death after a tense run-in with psychopathic prisoner Jackson, Kirsty and Tess come to verbal blows over the best way to treat a patient, and Casualty favourite Megan (Academy Award-winner Brenda Fricker) reveals the reason behind her return to Holby.

Adam’s having a bad day. Heart heavy with guilt over losing Harry, the last thing he needs is convict Jackson returning to taunt him. It appears that Jackson has become obsessed with Adam since he treated him the last time and has read all the press cuttings about Harry’s accident. When Jackson escapes from the Emergency Department with Adam’s car keys the doctor is implicated in his escape. Can Adam track down the highly dangerous prisoner and how does Jackson hold the key to Adam’s recovery?

Former Holby nurse Megan has been released from the ED, but her health is clearly troubling her. She returns briefly after helping a collapsing passer-by, only to be confronted by Tess. Concerned for Charlie, Tess urges Megan to contact him, but Megan stubbornly refuses. When Tess finds a worrying note, she tries again to connect with Megan, only to be brutally rebuffed. How long can Megan face her illness alone? Will she be persuaded to confide in her old friend?

When Kirsty jumps to conclusions after seeing some bruising on a patient, Tess lectures her about becoming too involved. Ignoring Tess’s warning, Kirsty rashly accuses the patient’s girlfriend of abuse but can only watch helplessly as they walk away. Furious, Tess lectures the younger nurse and a livid Kirsty threatens to make a formal complaint as she storms out of the hospital. But it looks like Kirsty might need Tess after all when she returns to the hospital with a head injury…

In this article:Cas Series 24, Martin Jameson