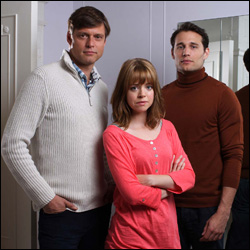 Ruth learns a devastating secret about her husband; Warren shows his true colours; and Charlie offers a shoulder to cry on – at huge cost to himself.

Ruth watches with horror as Edward brings a mystery man into the house. They begin to kiss before heading to the bedroom. Devastated, Ruth runs out into the pouring rain, desperately trying to fathom what she’s just seen.

Later, Adam is treating a patient who has collapsed at a party. Seeking a second opinion, Adam calls Edward, who comes to the ED along with his junior doctor, James. Ruth is horrified to learn that James is Edward’s mystery man. Could this be the reason she missed out on the neuro position?

Kirsty’s working day is disturbed by mysterious phone calls from husband Warren. Returning home she discovers that Warren is fine – it was one of his mind games. Frustrated, she tells him that if she keeps coming home like this she will lose her job. Warren demands to know if Kirsty has told her colleagues about him. Just what is Warren’s secret and does it explain the bruising Adam has spotted on Kirsty’s arm?

Meanwhile, Charlie discovers what is going on between Ruth, Edward and James. He tries to console Ruth, but she is livid to learn that Charlie suspected something for a while and never said anything. When Henry comes to her looking to make budget cuts Ruth thinks she knows just the person to be transferred out of the ED.

Elsewhere, Jay and Polly’s relationship hits the skids, Kirsty and Adam’s attraction grows and Jeff finds out whether he still has a job as a paramedic.

In this article:Cas Series 25, Rachel Flowerday