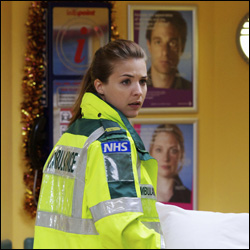 Tom and new locum Dominic clash over the right course of treatment for a patient, as Tamzin receives news that could end her career.

Tamzin and Jeff respond to a call-out to a shopping centre where teenager Jodie has fallen from a height after running from security. As she in brought in to the ED, Dominic and Tom argue over the best course of care, leading to blow-up and Tom lashing out.

Meanwhile, news reaches Tamzin that a legal case against the Ambulance Trust is being brought by ex-footballer Jay, whose neck she failed to immobilise. Having covered for her once, will Jeff step in again or will Tamzin decide to tell the truth?