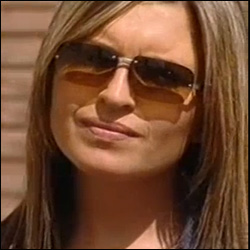 A clearly disturbed patient arrives in maternity with a dog, and instantly takes a liking to Owen. The woman allows Chrissie to take her dog, but refuses for anyone except for Owen to examine her. She also refuses to be examined with any machines.

Things on Keller are running just as unsmoothly, with Ric treating young footballer Jordan, who has signed to a premiership club at the age of 15. Ric arranges a biopsy as he assumes that the problems with the boy’s leg is due to a melanoma. In theatre, Ric’s fears are confirmed and the cancer has spread. Ric goes to see Jordan’s father and warns him that if the cancer is not cut out then his son could die, but the removal may damage his football career. The father gives permission for Ric to remove the lump.

Terry, Lisa’s dad, shows up on maternity and is fed up with the B+B. Lisa offers him her flat for the night, which he gratefully accepts. At the flat later, Kath shows up with Danny’s laundry. Kath helps Terry cook dinner and he tells her about his failed marriage, but she’s not as keen to share the details on hers. The pair almost kiss as Kath leaves, and it appears like the start of a good friendship. Meanwhile, Danny tells Sandy that him and Diane are an item.

The patient from maternity tells Owen that her name’s Monique Roberts and that she’s schizophrenic. She makes Owen promise that her parents and doctor stay away. The psychiatric team are desperate to talk to her, but Owen says that on his ward what he says goes, and that he’s given Monique his word. Chrissie brings the pregnant dog to Owen’s flat, and Owen expresses surprise at her sympathy towards the dog. Owen delivers a cutting account of Chrissie’s behaviour and personality, but she doesn’t want to listen.

Ric’s horrified when Jordan’s family appear to have brought in a solicitor. Ric is angry as he saved the boy’s life, while his father claims that Ric should have waited for test results. Ric confides in Diane that he doesn’t have legal cover, making him personally liable. He speaks to both father and son, and eventually his words get through when Jordan’s father discharges the solicitor and admits that he lied. Jordan tells Ric to enjoy his career, and Ric tells Jordan to enjoy his life. It is, after all, more important than football.

The pregnant dog dies in Chrissie’s care, but the newborn pup seems well. Owen delivers Monique’s baby and the following morning lets her visit her baby girl, despite it being against hospital rules. The psychiatric team have called Monique’s parents, and Monique is not pleased to see them. However, eventually she does what the doctors ask and leaves the pup in Chrissie’s care. Owen gives her his number, and asks her to call if she needs help.

Owen arrives home to find Chrissie and her belongings waiting for him outside. She’s decided to take the first step of commitment and move in with him. He says he loves her, and asks her to say the same if she feels it. However, the phone rings and Owen runs to answer it, worried that it could be Monique. Chrissie smiles to herself, and it’s obvious she’s where she belongs.