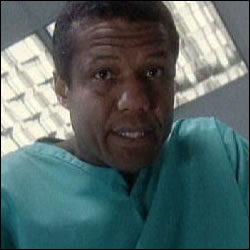 Ed, Zubin and Chrissie rush a patient into theatre where he is operated on. Zubin and Ed manage to operate on Len and take him to recovery where Zubin speaks to his daughter. Len sends his daughter to Maternity with Sonia.

Rosie and Mubbs admit a patient onto maternity who’s twenty six weeks. Tricia and Owen argue. Chrissie questions Tricia. Len’s daughter goes to see Sonia in maternity. Tricia goes to see Ric and offers to be his PA. Sonia is taken to theatre. Rosie comments on Mubbs about getting a girlfriend. Owen tells Tricia he can’t see her anymore.

Sonia loses the baby – Kim goes up to see Len – she tells him about the baby and he gets upset by it. Chrissie and Owen think about Amanda. Len admits to Kim about what he did that day. Len says he’ll try and sort things out when he’s recovered. Tricia leaves and goes to Ric’s office. Mubbs tells Rosie to set him up with a friend. Sonia and Len see each other for the first time since Len was admitted. The two are emotional and cry together. Their state stops Zubin from telling Len about Val.

Kath, Ric and Kelly admit a patient to Keller. Kath asks kelly to fit her with a catheta and Kelly snaps at her. Ric speaks to Helen Grant who has no news on Sarah Palmer. The patient admitted, Val Brennan, questions Kelly on having a partner. Helen reveals to Zubin and Ric the results for Sarah. The pump wasn’t faulty. It was human error. They take their patient to theatre and remove her spleen – although this operation makes the fracture in her spine more obvious. Kath gives her a HIB injection and asks Kelly to clamp the catheta that she’d put in. Kath isn’t pleased with Kelly’s attitude. Kelly goes to Ric behind Kath’s back for advice on clamping the drain. Zubin tells Val that she can’t be helped when Ric has spoken to Charles Merrick. Kelly goes to speak to Val – Val tells her to leave her alone. Kath reprimands Kelly for going behind her back to Ric especially since he’s a surgeon and it was a nursing matter. Kath has to think quickly as Val is in VF. She dies and Zubin flies off the handle at Len. Zubin goes to tell Len in his anger but can’t. Zubin wanders off as his bleeper goes, he tells Ric that the only way he gets through is to stay angry at the person who killed his wife.

Len Betchly – A patient brought onto Darwin who was involved in a drink driving accident.

Sonia Shaw – Is Len’s fiancee who is taken to maternity. Her baby is delivered fourteen weeks early and dies shortly after birth.

Val Brennan – A patient on Keller who is the victim of drink driver Len, Val has her spleen removed and also has a break in her spine which won’t heal. A short while later she dies.

[Ed, Zubin and Chrissie are rushing a patient into theatre.]

Ric: Did you tell him?

Zubin: No… I owe you an apology. My wife’s birthdays come and go, anniversaries pass. And I cope by staying angry.

[Zubin bleeper goes and he starts walking away]

Zubin: I’d better go. I’ll see if I can keep my next patient alive.

In this article:Andrea Earl, HC Series 5

Episode Summary Donna meets a handsome physiotherapist called Justin, who turns out to be Kyla’s ex. Kyla warns Donna off him, but this doesn’t...

S5 E30 (29 Apr 03) : Glass Half Empty by Stuart Morris Episode Summary Diane and Ric are standing by Ric talking of his situation...