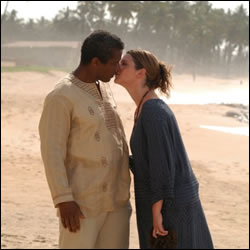 ‘Tuesday’s Child’ : Diane flies out to Ghana, to persuade Ric to come back and save the Holby General Surgical ward. She arrives at the hospital Ric is working at to find there is clearly a crackling tension between Ric and his brother. Kumi is distraught; Ric cannot do free operations. Its bringing the hospital to financial breaking point. Ghana’s a cash economy and credit doesn’t exist. Every cedi is invested back in the clinic, just to keep it functioning. This community needs this clinic and Ric can’t just use it to play the hero.

Back at his mother’s house, Ric finally gets a chance to ask why Diane’s really here, but she hesitates – after what she’s just seen, Diane’s well-rehearsed speech about Ric’s responsibilities seems trite and irrelevant. Diane believes that Ric is lying to himself about why he’s back in Ghana; he’s needed in Holby. She makes an emotional appeal on behalf of Jess and Keller Ward but Ric won’t be swayed, he’s needed here not in the UK. Ric storms off telling Diane to book a flight home. Diane talks to his mother, Paulina. They chat and with sadness Paulina reveals that Ric didn’t come home for his Dad’s funeral. They hadn’t spoken for over twenty years. Diane asks why, Paulina says she should ask Ric.

Ric meets his old school friend, Kwame Attakora, a highly respected local businessman to try to persuade him to fund the hospital. Ric realises that Kumi has told Mr Attakora about Ric’s family trouble back in the UK and Mr Attakora doesn’t trust Ric’s commitment to the clinic – especially when he clearly lacks commitment in his family life. The deal is off. Ric rages at his brother, why would he want to sabotage his own clinic just to make Ric look bad? Kumi explains that he couldn’t mislead Mr Attakora, as a Ghanaian he has to act honourably – something Ric wouldn’t understand. The clinic is bankrupt and Kumi chains the doors closed.

On route to the airport for her flight home, Diane asks about Ric’s dad, has he ever been to his father’s grave? Ric is exasperated – that’s ancient history. A man approaches desperately looking for a doctor. There’s a pregnant woman who’s is in labour. Ric and Diane find Joanna, a long-term malaria sufferer having trouble breathing. They need to deliver the child but there’s little hope Joanna will survive a natural childbirth and the nearest hospital is two hours away. The only option is to head back to the locked clinic. They go to get Ric’s colleague Percy to help and find him drunk in bed with a woman. Once at the clinic Ric, Diane and Percy fight against time to deliver the baby and save Joanna. Afterwards, Ric is on a high, this is what being a doctor is really about – making a difference and saving lives.

As it’s too late for Diane’s flight, she tentatively suggests to Ric, they visit his father’s grave, an exhausted Ric reluctantly gives in. At the graveside Ric talks about his turmutulous relationship with his father. Ric reveals to Diane that he still has feelings for her. Ric sees a woman at the graveyard and becomes suspicious, Diane tells him she saw his mother give her money yesterday. Ric questions the woman, Esi and realises she was his father’s last wife and widow. She has a son who is not in school and is clearly living in shame but she will not explain and tells Ric to speak to Kumi.

Ric confronts his brother about Esi and demands to know what’s going on. Kumi tells a horrified Ric that their father had HIV and died of Aids. They had to keep his illness secret so as not to bring shame on the family. He says that his father gave Esi HIV. Ric confides to Diane, he doesn’t know where to go anymore. Diane thinks that at some point you have to stop running. Diane tries to kiss him and says she has fallen in love but Ric tells her to go home to Owen. He’s made a mess of his life and he won’t allow her to do the same. She has a marriage back home – a whole life. She has to return to Holby. Diane asks Ric to leave for Holby with her but he says he must stay.

Diane finds Mr Attakora and makes an impassioned plea on Ric’s behalf. She knows he believes in this clinic, and that he wants to make it work. Mr Attakora softens and agrees to visit the clinic later. Mr Attakora arrives at the clinic and Ric tells him he is going to fund the hospital on one condition – Ric stays in Ghana, Ric signs the papers. Diane and Ric say a tearful goodbye as she leaves for Holby.

Written by by Andrew Holden

Man – shot after a robbery in a petrol station.

* Abra called Ric ‘Eric the Unready’ – because he’s ready for anything.

* Diane tells Ric ‘I think one day you’ll give me your name’.

* Kumi says at the end ‘Everywhere you go there are politics.’

* Ric had a watch which he was given by father, it ends up being given to the little boy of his father’s widow.