Norma is still struggling to cope with her elderly mother and is late for work. Duffy is worried about a letter she has received, asking for her to go back for a second smear test, Sandra reassures her. Maxine reveals her interest in the Territorial Army. Simon Eastman tells Kate off for keeping on agency nurses, she faces a review the next week, Charlie says he’ll support her.

Nikki sees Ash at work, and they have lunch outside. She suggests taking out another loan, but he says it’s a bad idea.

An elderly lady, Doreen, arrives at a tea party, to visit her old flame, Bill, who she dumped fourteen years ago and moved to Australia. Bill is angry at seeing her and thinks his friend, Reg, set them up. Outside he gets on his bicycle and deliberately rides into him. They collide leaving Bill with a wrist injury and Reg with a sprained ankle.

A mentally handicapped girl, Catherine, runs amok in the department after failing to take her tranquilizers and smashing her hand through a window. She even bites Ash. Julian sedates her and finds she has a problem with her blood. Her carer, Jill, who has minor cuts feels she has not been able to help her through the years and admits to sometimes being frightened of her.

During a game of squash, Frances, endures a freak accident when she falls and her racquet goes through her neck. Julian performs a cricothyrodotomy in CRASH. Her medical student friend, Rosie, is upset, but comforted by Rob, who admits that even he gets scared at what comes through the doors – even staff see him as arrogant.

A dedicated father pleads with staff to fix his top dancing daughter Tracey’s front tooth after it comes out – because she is supposed to be playing the lead role of Annie.

Julian calls Sandra into his office, they are awkward with eachother. He says he is attracted to her, and she hints the same, but reminds him that she is a married woman.

* Mentally handicapped Catherine Giggs – cut hand from putting it through window. She also has a low platelet count.

Norma at home with her Mum, she gives her a hot drink;

Norma : Come on Mum, you can’t stay like this all day.

Mother : Leave me, you cow! You’re hitting me.

Mother : I didn’t say that you could…

Julian : I know, I’m sorry but it’s said now, I just need you to know how you feel.

Sandra : That’s not fair either and I think you know the answer already.

* Julian reveals to having had two failed marriages behind him.

In this article:Cas Series 7, Peter Bowker 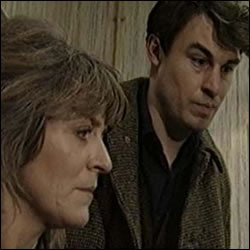 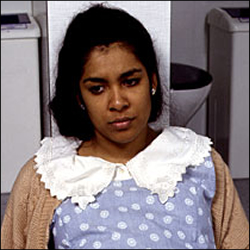