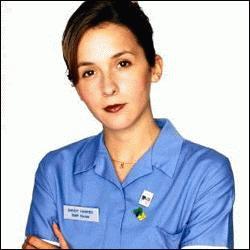 Sandy : Excuse me do you know they way to the cardio-thoracic ward?

Alex : Are you our new Darwin nurse?

Sandy was a sweet natured young woman. She was enthusiastic and dedicated at her job, but was somewhat naive. Fans warmed to her loveable character as she stumbled through life and never seemed to find the perfect love. In contrast to some of the confident and ‘super-human’ staff members, Sandy was human and was easy to relate to making her such an admirable character.

Sandy is immersed in chaos on her first shift in S3 E1 after an infection scare. Sandy admires new doctor Alex’s confidence whilst spending the shift babysitting a patient’s terror child. In S3 E5, Sandy makes a play for Alex at the hospital party. S3 E8, Sandy has a tough time being left in charge, whilst Julie is dealing with her ill daughter. In S3 E15, a patient tells Danny that Sandy fancies him. In turn, Danny tells Sandy that Alex has a crush on her. The staff all go bowling, Sandy is miffed when Alex is flirting with a mystery blond and tells a relieved Danny that she doesn’t fancy him. In S3 E16, Sandy snogs Liam’s best man for a dare before realising who he is. During the day, he continues to pursue Sandy and in the end she pours a beer over his head. In S3 E17, the car park attendant at Holby tells Sandy she needs a permit to park. He offers her a parking permit in return for her coming to his hut after work. She is shocked and throws the permit back in his face. Later she goes to confront him and discovers he has a hurt kitten in there which he wanted her to come and look at. In S3 E23, Sandy gets involved in a drug addict patient’s case. In S3 E27, Sandy supports Julie when they discover Victoria has been murdered. In S3 E30, Sandy takes an immediate dislike to new Sister Chrissie who is rude to everyone.

In S4 E2, it’s Sandy’s 20th birthday and Danny, Liam and Keri take her out to a pub and, later, end up back at Liam and Danny’s flat. Sandy thinks she’s in with a chance with Liam but Liam thinks otherwise. Liam gets closer with a drunk Keri but things turn nasty when she later accuses him of rape. In S4 E5, Sandy is unimpressed when Danny lets Marija and her young son stay at the flat. In S4 E12, Sandy befriends a patient, David, at Christmas. She is upset when he unexpectedly dies before his operation. In S4 E17, Sandy and the new, male midwife, Ben, fall for each other when they meet at a club on the evening before he starts work. They kiss but she is unaware that he is infact gay. In S4 E18, Sandy tries to make a move on Ben, when the staff are out at a bar. The gang watch as Sandy makes a fool out of herself, and Ben apologetically informs her of his sexuality. Sandy storms off, obviously upset. In S4 E21, Ben is expecting his parents over for dinner and he is stressing over telling his parents that he is gay. Ben suggests that Sandy comes to dinner to make it easier to break the news to his parents. Sandy is treating a patient who has lung cancer and doesn’t have long to live. Later Sandy is shocked when Ben introduces her to his parents. His father is the patient with lung cancer. Sandy wants to leave but his parents think it is best if she stays when they break the news to Ben. In S4 E42, Sandy is not impressed when Danny asks Lisa to move in with them. She was hoping for a ‘male professional’. In S4 E44, Sandy, Danny, Lisa and Ben have a drinking session at the flat. At the end of the night Sandy helps Danny upstairs; he is very drunk, and confesses that she wants to be more than friends. Unfortunately, Danny has fallen fast asleep, so doesn’t hear her. Sandy returns downstairs and argues with Lisa, who by now, realises that Sandy is jealous of her.