Will Sharpe first hit our screens in September 2009 as quirky F2 Yuki Reid. He talks to holby.tv about his role…

You’ve been on the show nearly a year, are you enjoying your time on CASUALTY?

Mostly yes. The crews are always very, very good, quite humblingly good. It’s kind of inspiring. And you get some fun, interesting guest artists coming through from time to time, which is nice.

Yuki must be a great character to play, how would you describe him and what similarities/ differences do you share with him?

He has the same size wrists as me. And the same elbows. But different clothes.

How did you get the part of Yuki?

It was probably just a giant mix up.

I’d never seen it, but obviously I’d heard of it. I didn’t really know anything about it other than that it was something to do with people getting hurt and then either getting fixed or dying. I didn’t realise Holby City and Casualty had anything to do with each other until about a month into the job either.

What have been your most memorable scenes to film so far?

I like filming scenes outside the hospital, so I remember those ones best. I was in a bin the other day. That was quite an unusual feeling: to be in a bin, thinking: ‘this is my job.’ Filming on the roundabout was fun as well. Anything that’s different to standing by a bed spouting jargon.

Yuki’s love interest is May Phelps. Will we see this develop more over the rest of the series or him finally getting the courage to tell her?

You’ll have to wait and see!

Do you find the medical terms difficult to learn/say?

Not really. I have quite a good short term memory. I think from years of never studying for exams until the last minute. And I use a similar but more extreme method for learning lines, which is not learning them at all. There’s so much hanging about while the scene is lit and blocked that you sort of just end up knowing them by accident. And if you know them too well then, when it comes to saying them, they just sound like noises anyway. You forget what they were actually for. I do sometimes (often) need to ask the medical advisor how to pronounce something though.

Do you think you would be a good person to have around in an emergency?

You’d have to ask someone else. After an emergency. I can do things like rescue burnt toast. Just scrape the burnt bits off into the bin or the sink. You know? Just scrape it off. I like to think that, at the very least, I could put a positive spin on a bad situation. Like: yes we did crash, but it wasn’t a very good car anyway.

Who are your closest friends on Set? During the long hours on Set, what do you do to keep yourselves entertained?

Everybody’s very nice. I write. And wait. And walk in circles. There’s often DVDs being watched. Sometimes I’ll phone somebody and hope that they’re equally unoccupied.

You’re also in a band ‘Jumpers for Goalposts’ – what can you tell us about the kind of music you perform? On your website, you refer to yourselves as ‘Yuki and Rose’ – was Yuki’s name on Casualty influenced from your band or vice versa?

Have to listen to it (www.yukiandrose.com or there’s a page on Facebook somewhere). It’s quite eclectic.

As for the name, they asked me what I wanted the character to be called right after the audition. So I said ‘Yuki’ just to see what happened.

Do you prefer music or acting?

Depends. I love doing both. Maybe music. At the moment anyway, while it’s just for its own sake and it’s not winning anyone any bread or anything.

What else do you enjoy doing in your spare time?

Sleeping. Cities. Playing football. My friend Tom Kingsley and I made a short film called ‘Cockroach’ in the two week break over summer. And we’re making another one this summer. 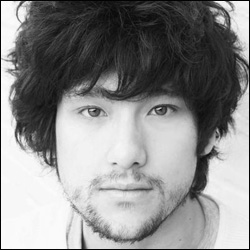