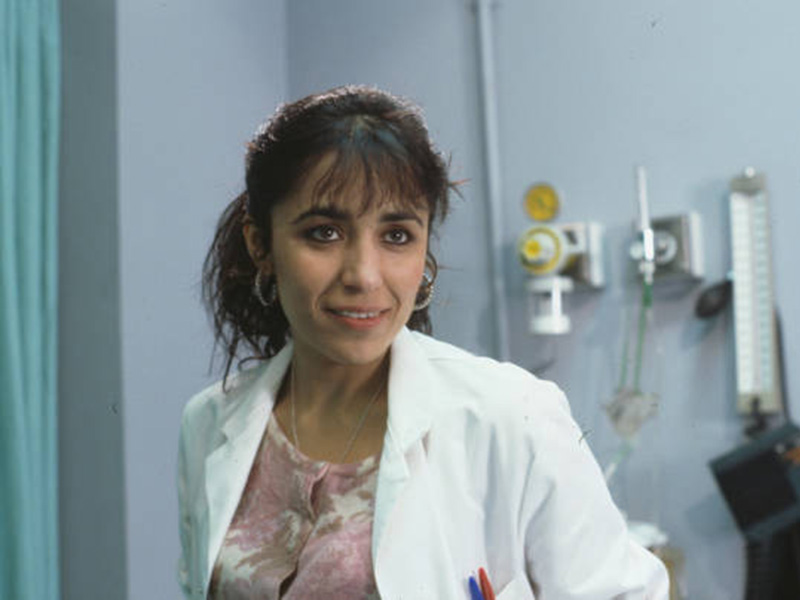 Asian doctor, Beth Ramanee, was the first SHO in CASUALTY to have been so popular that she appeared in two series’. Beth was born in Cheltenham, her parents were both Indian, however she had never been there herself. She attended 6th form college, and worked extremely hard to get through medical school, keeping her feet firmly on the ground. It made her a compassionate, caring doctor, with a social conscience – and genuinely wanted to help every patient that walked through the door. For this she was often told off especially from her superior, Julian, for getting too involved.

Beth is introduced to us in S5 E1, and already we see she has a fun sense of humour, by playing a joke on Ash – with a skeleton put on a cubicle bed – Julian is not impressed and it is clear that the two may clash in the future. Her first shift involves a riot at a football ground in which there are many injured. Beth treats a lad who has fallen down some steps, and about to discharge him, Julian firmly tells her he must have an x-ray. An old man is also brought in with a fractured wrist, suffering from malnutrition, Beth finds out he is too poor to have food and warmth, and calls in social services to offer him help, which he doesn’t take. Beth realises she can’t help everyone. In S5 E4, Beth discovers an elderly man, who is in to see his wife on another ward, is ill himself with pulmonary edema – he later arrests and the staff manage to save him. In S5 E5, Beth and Julian clash over his harsh treatment of a drug addict, Beth is shown to always treat patients equally. And in S5 E6, Beth is unable to save the life of a hospital porter who arrests in the department. In S5 E7, Beth and Megan treat an old lady who is found to be carrying thousands of pounds and doesn’t want her husband to know, however she dies and Beth has to give him all her belongings. In S5 E9, Beth treats a black prisoner who confides to her that he has been raped. She feels he has been treated harshly in prison, because he hasn’t even been charged and tries to do her best for him. She also advises an alcoholic tramp to give up drinking, when his estranged mother arrives, she tries to persuade her to take him in and get him to have his needed operation. This episode she also has to deal with an anorexic girl who overdoses and dies. In S5 E10 a baby boy is brought in by his Greek parents with a broken leg. It’s not the first time he’s been in and Senior Pediatrician, Esther, arrives and abruptly calls a case of mistreatment, but Beth believes it to be brittle bones. Julian tells her Esther has more experience and shouldn’t question her judgement, but behind her back she gets a second opinion and is proved right. In S5 E12, a girl is brought in after trying to commit suicide, her elder sister arrives and reveals her father abused her and now thinks he is doing it to her, Beth confronts the father and he admits the abuse.

At the beginning of series 6, Beth attends an interview for a GP post. She is shocked when Julian asks her to stay at A&E and at the end of the shift she agrees to stay on at A&E and at the end of the shift she agrees to stay. In this episode she also respects a dying cancer victim’s wish not to prolong his life, after his partner Zoe, shows her a form he has signed. After he dies, his daughter arrives and calls the police, saying Zoe killed him. Charlie warns Beth to make sure all her notes complete. Next episode, Beth faces a coroner’s inquest. The judge gives a verdict of suicide, angering his daughter who threatens to sue Beth privately for negligence. In S6 E5, Beth treats a neurotic woman but can’t find anything wrong with her and has previously come in with different symptoms. Social Worker Trish is called in to have a word, where it is revealed her real problem is her husband’s constant need for sex. In S6 E6, a teenage boy comes in with his mother who suspects he is faking injuries, but Beth suspects he has MS. This episode she also worries about the court case and doubts her abilities as a doctor. In S6 E7, Beth finds out the negligence case is being dropped, because they can’t afford it, relieved – she breaks down in tears. In S6 E9, an old drunk us brought in, he upsets staff with his behaviour and keeps mentioning his wife, but when he sobers up, he reveals to Beth that his wife is dead and he hopes he didn’t say anything naughty when he was drunk. In S6 E12, a woman ‘Faye Dunaway’ is brought in with stomach pains, which is found to be an ectopic pregnancy. Beth is sure her husband has beaten her up and in the interview room, enraged she slaps him, as he doesn’t seem to care what’s happened to her. Julian also finds out Beth has applied for another GP post. In S6 E14, Beth treats a young boy who accidentally shoots his grandmother, he won’t speak, but Beth finally encourages him to talk. Beth takes her interview for the GP job, and tells Duffy it looks hopeful and she liked the atmosphere, next episode she finds out she’s got the job and will start in a month. In S6 E15, staff attend Beth’s leaving party, Charlie even arranges an ‘Opera-o-Gram’, but it’s all cut short when they are called back to A&E after a plane crash. Throughout the night, they deal with casualties and in the early morning, Beth says goodbye to her friends, saying one half of her doesn’t want to leave, but the other half is saying that the job as the nearest thing to hell.