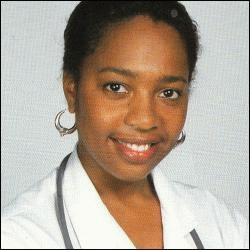 Hi, you’re gonna need a few stitches on this, is there someone we can call for you, let them know you’re here?

Black and working class, Eddie Gordon was a young doctor who has taken plenty of knocks before she arrived at Holby. She was never afraid to ask questions of Mike or of the nurses, or to admit that she didn’t know what to do sometimes. With patients she was direct and tactful. Her weakness was that, for all her outward confidence, she couldn’t break bad news to people. It was something she overcame during her year as SHO in Series 9. Eddie was also honest with very strong morals, which were tested when Ash was faced with a court case.

One of her first patients in S9 E1 was a teenage prostitute, who confesses to selling her kidney in order to get money to attempt to break away from her pimp. In S9 E6, Eddie accidentally collides with Jean, a hospital cleaner. Jean asks her for painkillers for a headache. A CT scan reveals that Jean has an aneurysm in the brain, which has burst and Eddie is faced with having to break the news to Jean. In S9 E7, a anti-racist march sets off towards the headquarters of AXE. Casualties arrive in A&E following an ensuing fight. Ash finds himself the subject of racist abuse, He finally snaps when racist, Mark Hitchins, insults Eddie. He threatens Hitchins and Charlie orders Hitchins out the department. On Ash’s way home, Ash is cornered by Hitchins and threatened with a knife. Ash knocks him to the ground. Eddie witnesses the fight in an upstairs building, however does not see the knife. She is horrified of the attack and Ash’s violence. Next episode in S9 E8, Ash learns Hitchins has made a formal complaint, but Eddie says she is unable to back up his claim that Hitchins had a knife. In S9 E11, Eddie treats a patient with hearing difficulties and discovers she has a moth in her ear. Being phobic, Eddie asks Ash to remove it. In S9 E13, Eddie treats a teenage girl who is found by a railway line being violently sick and quickly deduces she is bulimic. In S9 E16, an elderly lady is brought in after a fall – Rachel believes the injury is not new and Eddie confirms her suspicions. The lady then confesses her son beats her. In S9 E19, Eddie treats an ex-model whose liposuction treatment has become infected. She also treats a baby who is brought in by her recently widowed mother, Sheena. Concerned by her baby’s constant crying, Eddie reassures her baby has nothing more than a cold. Later, Sheena is brought in after crashing her lorry – Eddie recognises her and asks about the baby. The fire brigade are then called to find the baby in the wreckage. Eddie also receives the results of her exams, but is afraid of opening the envelope. Mike obliges, and congratulates her on passing.