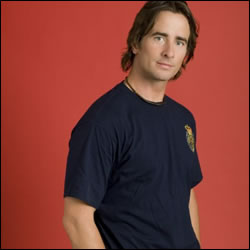 Maggie : Is that your dog?

Greg’s an outdoor boy who loves nature and is into extreme sports. He won’t take any nonsense from people he doesn’t respect – although he can be charming and generous with those he does. Greg’s generally an open person, but is secretive about why he became a paramedic.

Greg is late for work on his first shift in S20 E40 and has his dog, Grub, in tow. Nina is unimpressed when she realises that he is late because he couldn’t find anyone to look after his dog, and has brought her to work with him. She tries to find out about Greg’s background but he gives little away. However Nina and Josh are both impressed when Greg manages to calm a runaway horse at the scene of an accident. Greg also befriends a young joyrider whose mother dies. In S20 E43, Kelsey starts a rumour that Greg is gay when she sees him wearing mascara, and she and Nina make it their mission to find out. Greg guesses what they are up to and to prove he is straight he spins Nina around and kisses her playfully on the lips. Abs looks on, jealous. In S20 E45, Nina holds a house party without Abs’ knowledge which leads to a fight between the couple. Nina tries to turn her attention to Greg, who rebuffs her. In S20 E46, Nina tells Abs that their relationship is over and he gets the wrong impression when he sees Greg comforting her.

In S21 E4, following the recent arrival of paramedics Cyd and Dixie, Greg gets a chance to bond with Cyd when they are partnered together, though Greg is seemingly coy about his past. In S21 E14, the animosity between Greg and Abs clears when Greg makes a peace offering (hash given to him by a patient) however when Tess finds it on him, the pair join forces to get themselves out of trouble. In S21 E19, following recent tragedy, Greg and other staff members head to the coast but their day doesn’t go quite according to plan when they are involved in a sea rescue. Greg confides in Cyd about his close friend who died but when she tries to kiss him in the staffroom later, he backs off. In S21 E20, Cyd’s loyalties are torn when Greg and Dixie reveal they are both applying for Josh’s job. And Greg looks put out when Dixie announces she’s got the job in S21 E22, and proceeds to brag about it. In S21 E25, Abs notices the attraction between Greg and Cyd and tells Greg he should make a move. Greg tells him he’s not long out of an intense relationship but Abs tells him he should move on. Having been roped into a testicular cancer project for students, Greg, wearing just his boxers, plucks up the courage to ask Cyd out and they kiss. In S21 E26, Dixie looks put out when Greg kisses Cyd infront of her and announces they are having a night in together.