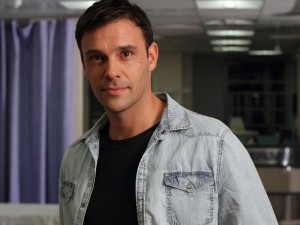 Following a three month break from HOLBY CITY, Joseph Millson returns to the show this week. His character Luc disappeared into the night, leaving Eddi confused and heartbroken.

Joseph talks to holby.tv about his return and his opinions on one of the show’s most talked about and popular couple this series…

What can you tell us about Luc’s recent exit?

I can’t tell you where he went because I don’t know! It was very much a decision not a cop out. I love the sheer weirdness of it. He disappears because I think it just got a bit too hot. He’s not great with really big emotions and commitment. Having the responsibility of another human being, doesn’t appeal to him, for whatever reason.

The traumas in his past – I’m sure we will find out eventually. With the script that I’m reading about now, which I can’t tell you too much about – there are some big things in his life which does explain things, all his strange idiosyncrasies.

So that’s why he left, I think, but he came back because he was asked to by Sacha. It was against his better judgement. He doesn’t want to be there and then when he sees Eddi kissing someone else. He hates all that petty jealousy emotion so he thinks he’ll just do a days work and disappear but ofcourse events transpire that he can’t just do that!

Why does he decide to stay?

I think he ends up staying to get rid of Max, not in just a jealous way but partly because he sees him in an operating theatre, when they work together with a patient and sees that he is a loose cannon, just dangerous. He wants him out for the hospital’s good and definitely for Eddi’s good.

It transpires that Max has done enough damage to Eddi, that Eddi now needs fixing. There’s nothing worse than trying to fix people (eventhough she doesn’t want to be fixed and especially not by Luc!), but he forces himself on her! In a very funny episode coming up, she’s so out of control at Sacha’s wedding that Luc ends up kidnapping her putting her over his shoulder and dragging her out of the wedding! Luc forces her to go cold turkey on the drugs she’s been taking. You know when you get some dogs that just go mental? Trying to keep them at arms length whilst they are going mad – that was Eddi! So yes, he gets stuck on the idea of fixing her – but not everyone wants to be fixed.

How serious are Eddi’s addiction to these painkillers?

It gets very serious. It’s quite a fascinating thing. It’s prescription drugs, which can be terribly strong and have such terrible side effects. It’s a very real issue. You don’t realise you’re addicted till you try get off them.

Eddi won’t admit that she’s addicted so that’s the problem, but when you let someone do that and you’ve been in such a vulnerable place that you’re then in that situation where you flip from being enemies to being utterly co-dependant on someone in 24 hours. Then that’s a bit much for her. In a way it’s almost a role reversal; she would like to leave a key under a rock.

Do you see a future for Eddi and Luc?

Yes I think they clearly adore eachother and are kind of the only people that would work for eachother. But they haven’t gone for a cosy resolution here. It comes for nothing to me and Sarah-Jane because we love working together. Both of us are awkward people in real life and so I think for both of us, there are no egos on the floor when we work together. I think the audience have really gone for Luc and Eddi and that is part of what it is. We’re able to totally serve the story and not ourselves when we work together. We just get on with it and have fun doing it. The camera never lies and I think that comes across.

Do you think they should they be together though?

They should either be together or on their own! They’re not going to find a better match. Who else would be right for Luc? That would say to him ‘You’re being an absolute moron!’ and someone who wouldn’t pussy foot around him. The same for Eddi, she’s so self righteous – she needs someone who can put her right!

Eddi must be more anxious now of getting close to Luc after the way he left previously?

Exactly. He’s not asking for marriage and children, he’s just saying he’s here, please let me help but she says go away, I don’t need or want your help and if she did he’d be the last person on earth she’d want to help!

Why does Luc keep coming back for more?

I think he must have fallen in love, simple as that! Probably the only time in his life that he’s ever felt like that so he doesn’t recognise it. Shorthand is he’s Dr Spock – he’s a Vulcan. He’s devoid of feelings, I suspect he would be on the social scale of Aspergic, he doesn’t quite register empathy in the way most people do. He’s very tunnel visioned. Dr Spock married with Sherlock Holmes!

What is it that he loves about Eddi?

She just early on didn’t let him get away with anything and has made him aware of his condition. This is already the longest he’s stayed in one place, so he’s literally spent more time with her than anyone else and she hasn’t let him down. Even professionally, they are like sixth sense. They work together brilliantly, he trusts her implicitly. Trust is a big thing – it’s the first thing that attracts someone. Especially for him because he probably doesn’t trust many people.

What feedback do you get? Do viewers seem to want them to get back together?

Well I’ve recently gone for the Twitter thing, it’s the only place I’d really see any feedback as I don’t tend to ask my friends and family what they think about it. But I haven’t really seen many negative comments; they all seem to really love them! But then again, I think they’d hate it to all be signed, sealed and sorted. We have to get friction between them, ofcourse! There always has to be that love/hate thing going on.

What was it like taking a hiatus from the show?

Brilliant. It was an accident because I had a second series of Campus pre-booked that I was contracted to when I joined Holby, but then Channel 4 dropped the show for whatever reason but Holby had already storylined me out so it was too late. I was left high and dry, without work for twelve weeks!

I have to say I was over the moon that John Light (Max) was sort of filling my shoes whilst I was away. I’ve known him for ages and he’s so brilliant in this but because he’s playing such a nasty character, he won’t get the full praise for it!

Whilst I was off however, I managed to get a big part in a little film and a little part in a big film, plus a radio series and time to move house, so it was great in a way. The producers were quite chuffed as they haven’t had any characters for a while who have form to just come and go, so who knows if they will use that in future. You don’t want to frustrate and annoy the fans too much but I think this time they got attached to Luc and Eddi and then wondered where he went! It’s great if you can surprise them like that.

Can you tell us anymore about the upcoming films you are in?

The little film, hats off to them is a British film called ‘Dead of the Nite’, yet another horror but a good cast. Tony Todd who played the Candyman is in it. That was great fun.

‘I Give It A Year’ is the other film which I think is going to be big next year! It’ll be out on Valentines Day. It’s a mickey take of any Richard Curtis film ever made! It’s written and directed by Dan Mazer who also directed Bruno and Borat. There’s a good ensemble cast. I play Anna Faris’ boyfriend in a few scenes, god knows what they will use from it as there’s a lot of improvising! We did a 12 hour shoot of a comedy threesome and you’d think that would be the best day’s work
you’d ever have but it was a nightmare! But seriously the script is so good, that you’d have to work really hard for it not to be brilliant. I can’t wait to see it even if I’m cut out of it!

So are you glad to be back on Holby?

I’m not just saying this but it’s just the best place to be on. I’ve done a few long running TV things but I’ve never known anything like this. I laugh from 7 in the morning to 7 at night. I think I’m especially lucky in the ward I’m working on; AAU with Bob Barrett, Hari Dhillon, Sarah-Jane Potts and Tina Hobley. We just have a laugh! The whole crew and directors too!

AAU is exciting, it’s the closest to Casualty – we’re the next ward up! So we get to whizz in to the wards with all sorts of drama! It’s always hectic; it’s more sedate on the other wards!

What with the imminent wedding of Chrissie & Sacha, no wedding plans for Eddi & Luc?

Certainly not yet! Some cast members are way ahead on scripts and like to get involved in their characters that way but I much prefer to get the scripts as a surprise.

It’s not laziness on my part, in 20 years of doing this, I just don’t feel that’s my job, it doesn’t help me. There’s a great quote, playwright David Mamet saying the brilliant thing about actors and research is like air pilot school; if pilots had a whole day to flap their arms about in the cockpit that’s great but it doesn’t help to fly the plane. And I feel, on the whole, the same about extra curricular for the actors and I think it’s down to the fantastic writers to fill in the gaps. The audience always project and that’s more fun – instead of me telling you what to think about the gaps. I think the same about good song writing – this has come from my heart and you put what you want into it.