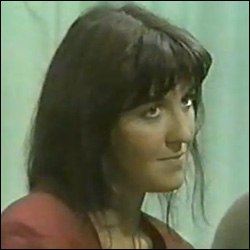 Excuse me, can you tell me where I can find Mr Flanigan – the Consultant in charge?

Middle class and liberated SHO Lucy Perry joins the team from S4 E1. She proves to her colleagues that she knows her medicine and doesn’t mind getting her hands dirty. Her bedside manner was also soothing, but she could also be tough. Lucy wasn’t used to battling with slow and often illogical hospital system and often argued with Charlie and administrator Valerie and hated to kowtow to consultants. Skilful with her hands, Lucy already knew she wanted to progress to general surgery. She was a new thinker, an art lover, a believer in holistic approaches and was full of surprises. Alternatively she was also, as one of her patients concluded, ‘an oddball’.

In S4 E1, she is thrown in at the deep end on her first shift following a motorway accident. Lucy is called to the scene and is forced to operate on a crash victim on the roadside. Back at A&E, she also treats a woman and finds she’s suffering the advanced stages of cervical cancer but failed to check out her symptoms earlier. In S4 E2, a coach, carrying a group of American tourists crashes. One man, Howard, is brought in with cuts and an eye injury – Lucy manages to remove a splinter from his eye. In S4 E3, a squash player is brought in with a dislocated shoulder, Lucy tries to put it back into place but fails – it’s the strength of Charlie that succeeds. In S4 E5, Lucy is annoyed when she received a letter saying she has failed her primary exams. She also talks about Leonardo de Vinci to a housewife, who dressed as an angel, has given herself a hernia from doing ballet dancing. In S4 E6, a new SHO, Richard treats a woman with stomach pains. He calls out his boss, Dr Lewis, who is angry he missed an ectopic pregnancy. Tired and upset, Richard overdoses, but Lucy manages to save him, and she has a go at Dr Lewis for his care free attitude. In S4 E7, Lucy tells a patient off for wasting their time, when he calls an ambulance, after swallowing a staple. She also diagnoses a boy with appendicitis. He needs an operation but they are at first unable to find his mother to get consent. In S4 E8, Lucy tells the family of a Sudanese girl who has become seriously ill after being circumcised, that their practice is illegal. The Surgical Consultant also observes Lucy demonstrating relaxing techniques on an anxious man with heart palpitations, he casts him off as neurotic and tells her if she wants to succeed not to follow those ideas. In S4 E10, Lucy removes a shield from the swollen arm of a man in full Viking costume. She also treats a young boy, who has accidentally swallowed aspirin. In S4 E11, an old lady is brought in with a broken hip from falling. Jimmy suspects her daughter, Mary, has pushed her downstairs, and tries to tell Lucy, but she dismisses it believing the old lady is senile. It is not until Mary pushes her off her cubicle bed, pushing Duffy and cutting her face in the process, that they realise she is the demented one. In S4 E12, Lucy faces another stressful shift following an explosion in the city centre.