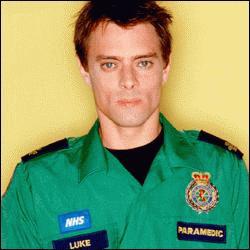 (to Lara) We’ve been all set for the last three hours!

(to Comfort and Josh) You go on, get off. I hate long goodbyes.

In S17 E32, new paramedic Luke Warren arrives on the scene looking rugged and ready for action. He is thrown in at the deep end on his first day when he is trapped in the cellar of a house with teenage girl, Samina, after a gas explosion rips through and destroys the rest of the building. He bravely performs a life-saving procedure with guidance from Lara, who calls instructions through the small window. Though they have been sparring all day, Lara is quite taken with his cheeky arrogance. The girl in his care recognises him as an ex-footballer and she is not the only one surprised to see him in his new role. Bex is shocked when he turns up at reception but immediately puts him straight about why they are no longer married. In S17 E36, Luke is called to an incident at Holby United, his old stamping ground, which reawakens old memories. The past also comes back to haunt Bex when a player is brought into the hospital. Bex reveals that it was the injured player’s vicious tackle which ended Luke’s career in football. In S17 E38, Luke spends the day shadowing and irritating Lara but, at a loose end, she is persuaded to go for a drink with him. They head to a bar and swap alcohol-induced personal confessions. Lara invites herself back to Luke’s and they end up in a passionate embrace. In S17 E39, Lara wakes up in Luke’s bed with a raging hangover. Feeling ill, she corners Luke to find out exactly what happened the night before. After trying to tell him that the whole thing is a mistake, Luke coolly knocks her off her perch by pointing out that there is not actually anything between them.

In S18 E5 Lara and Luke are attending a photo shoot for the launch of the RRU (Rapid Response Unit) when they are interrupted by a call out to a road accident. They disagree about how the situation should be handled but the decision is taken out of their hands when they are called to another incident. In S18 E14, Bex arrives late, looking pale and lank. She is scared of what might be wrong with her but Luke stays by her side and persuades her to get checked out. She is horrified when the results show she has diabetes and rushes out of the department in a state of panic. In S18 E15, following the shock news that she is diabetic, Bex is distraught. She refuses to answer the door when Luke, concerned that she has not received any insulin, comes to check on her. Instead, she drowns her sorrows in wine and cigarettes, unaware of the danger she is putting herself in. Luke later finds her collapsed. In S18 E17, when a young soldier dies in A&E, Luke feels responsible for overlooking his head injury. But it’s not his fault; the soldier’s heavy-handed senior officer, Dale, lied about vital medical details to cover up the fact that he gave him drugs. This discovery makes no difference to Luke, and Dale’s nonchalance winds him up further, but when he joins Lara for a drink, she manages to put a smile back on his face. In S18 E18, frustrated by the unnecessary death of a young soldier, Luke accuses Dale of lying and vows to uncover the truth. Dale and his heavies pay Luke a visit. In S18 E19, Luke finds out the truth about Dale and discovers that he has tried to kill himself. Luke refuses to let him get away with it that easily. In S18 E24, Luke is disgusted when Fin admits he lost it with Comfort and hit her, but still offers him a bed at his place. In S18 E27 Luke’s old football coach, Percy Miles is brought in, after being found collapsed in his car. He is discovered to be a child abuser. In S18 E31, as Josh and Luke are leaving a bogus call, a man Greg appears from the back of the ambulance, holding a gun and demanding the key to the drugs box. In the ensuing struggle, Greg is shot in the stomach. In S18 E32, Josh has to suspend Luke pending the enquiry and inquest into the gun incident. Josh assures Luke it is standard procedure but Luke is unable to fully believe this. In S18 E35, Luke turns up in the department, bored during suspension. Bex asks him to do some filing to distract and he asks her out for a drink as a thank you. In S18 E36, Bex is keen to cheer Luke up, so they go speed dating. When Luke realises that Bex has all the qualities he likes in a date, there is sexual tension between them. In S18 E39, it is the day of Luke’s inquest. Josh sticks to his story and claims that drug addict Greg was holding the gun before it went off. Greg’s wife, Kate, tries to get Luke to say it was his fault but the coroner returns a verdict of accidental death. Luke, however, announces that he is going to quit. At his leaving party Fin asks Luke to be his best man on one condition only – that he doesn’t quit. In S18 E42, Bex is elated after her evening with Luke. She is convinced that they have a future together and confides to Claire that she is in love with him. When Bex tells him she has planned a romantic dinner for two, he admits that their night together was a mistake. Bex is crushed but vows to Claire that she will get her man. In S18 E45, Bex tells Luke she thinks they should get back together. He says categorically that this will never happen. Later, Bex tells Claire to keep an eye on Luke as he is talking to another woman, but Claire ends up kissing him. In S18 E46, Bex overhears Luke and Claire talking about their kiss, upset and angry she has a cat fight with Claire.

In S20 E9a, Luke and his paramedic colleagues are doing a demonstration for children at an unruly school when things go wrong. Josh loses his temper and slap a boy who tumbles into him as he treats a patient. Woody is unhappy at the incident, but Luke offers Josh his full support.