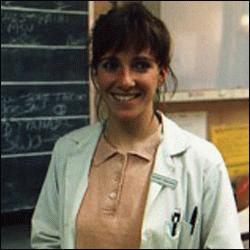 (to Ewart) Excuse me, I just wanted to say I was there today and I thought you were brilliant

Serious and moody SHO, Mary Tomlinson, from Walker in Newcastle, receives a cold reception when she arrives in Holby A&E. Duffy calls her ‘po-faced’ and Megan likens her to Dr Zhivago when she handed out a list of jobs.

We are introduced to her at the end of S2 E1. Ewart and his team have been trying to win back the night shift at Holby, and after a DHA meeting to decide it’s fate, they find out they have won it back. They enjoy a victory celebration at a local pub, where Mary introduces herself to Ewart and asks him if she can be his new SHO. She had previously been working at St Stephens. In S2 E2, Mary arrives for her first shift, and has to deal with many patients including a teenager desperate to get pregnant who has been having sex through her urethra, and she urges a man to give up drinking before he dies. She also surprises staff when she turns up to Susie’s flat warming party. In S2 E3, Mary deals with an elderly woman, who she believes is starving herself because she can’t hear her Meals on Wheels coming. She plans to tell her carer, as she does she finds out she has Alzheimer’s and simply doesn’t remember she has eaten. In S2 E5, a snake artiste, ‘Wanda the Human Anaconda’, real name Hilary, arrives after she is caught up in a battle to get out of a club, when her snake escapes. The staff are surprised to learn that she is an old friend of Mary’s, and all try to get gossip from her. In the obs ward, Hilary shows a small snake to Mary, that she has with her. Mary then takes it to the staff room to scare Charlie and Cyril with. In S2 E6, Mary treats an Asian woman who has had a miscarriage, she believes is to be self induced. She is also unhappy about Duffy’s work as Acting Sister, they snipe at eachother during shift, but after Charlie is called out after an incident, Duffy is in charge and Mary tells Charlie that she was ‘brilliant’. In S2 E7, Mary and Charlie are on standby at an estate, in which police are aggressively questioning locals about a drug ring. A fight erupts and Mary has to deal with the casualties. In S2 E9 Mary is nervous on her first call out after a bomb explosion at a block of flats, Duffy is with her and their frosty relationship thaws when Mary bravely scrambles through the wreckage to treat a man in the rubble. Mary nearly falls through the floorboards, but is saved by the firemen. In S2 E10, Mary treats a baby, whose mother claims has fallen out a window. Mary doesn’t believe her when she sees the baby is covered in bruises and later finds out the mother’s boyfriend has been hitting him. In S2 E11, Duffy finds out her boyfriend has HIV, she is angry and upset and confides in Mary, who persuades her to take a blood test for her own piece of mind. In S2 E12, Cyril makes a bet with other male staff that he can get an antisocial Mary to go to breakfast with him, he wins the bet as Mary accepts, but she realises it’s a bet and chooses a really expensive hotel. In S2 E13, we are introduced to Mary’s parents, George and Ann, who are down from Newcastle visiting her. George, a diabetic, collapses after accidentally overdosing on his tablets. Ewart treats him as Mary feels unable to. Mary’s boyfriend Brendan also arrives to look after Ann, the staff are curious to see him. We also find out that Mary used to have speech training lessons to get rid of her ‘Geordie’ accent. In S2 E14, Mary tries to comfort a women, who can no longer cope with her paraplegic husband, she also argues with Ewart over a woman with stomach pains, who he believes is faking it to get drugs. His experience gets the better of her, as he ends up being right. In the last Christmas episode of Series 2, the team go around town and end up outside Ewart’s hospital ward, where he is recovering from his heart attack. Mary reveals her wish to move on, into surgery.