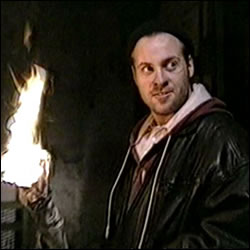 STORYLINE : Terry is gang leader of a violent group of youths have been terrorising an estate. They attack and elderly man. Later a vigilante group attempt a revenge attack which leads to a fight erupting. Terry stabs one of his gang, John’s father who later dies. Terry and his gang then continue their disruption in A&E, where Terry sets fire in the hospital basements.

24 years ago today on #Casualty.. @mattbardock made a guest appearance as a youth who set fire to the hospital! #htvthrowback pic.twitter.com/45k8fAxC8p

Matt Bardock heads back to theatre in a production of 'Measure for Measure'.

Following on from his successful run in ‘My Night With Reg’, former CASUALTY actor Matt Bardock is returning to the Donmar Warehouse in London....