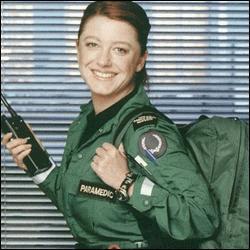 Mel is introduced in Series 14 as a work partner to paramedic Fin, but is kept quite in the background during Series 14, often attending callouts alongside Fin, but having no major storylines of her own.

In Series 15 the character becomes slightly more prominent. She is seen with Penny in S15 E2 joking about the men in the department; they are scoring them all out of 10. Mel reveals she quite likes Dan Robinson and gives him a score of 8.

In S15 E6 Mel comes to the rescue when her and Josh are called out to an accident on a Cliffside. Josh gets stuck when attempting to rescue the injured boy, leaving Mel to get help. When the pair are transported successfully to hospital, Mel talks to the aunt of the injured boy, telling her that her son, who she’d previously been angry with, was a hero for calling the ambulance for his cousin.

Mel and Penny are back to joking around in the ambulance between shouts in S15 E8. Mel tries a psychological game on Penny: she’s won a competition and David Ginola, Clive Anderson, Einstein or Brad Pitt are in a room; she has to decide who she’d spend the evening with.

It is revealed in S15 E10 that Mel is afraid of dogs. On a call out to the cottage of a woman with several dogs, Mel struggles to move from the ambulance, leaving Fin to do most of the work. He is not happy with this and tries to broach the subject with Mel, who doesn’t want to talk about it.. Fin later tells Barney about the situation and they both tease her. Mel gets upset and walks away. Fin goes after her, and she tells him that she’s not just scared of dogs; she has a phobia surrounding them and feels physically sick whenever she goes near one. She opens up and reveals to Fin it’s because she was attacked by a neighbour’s dog when she was a child. Fin apologises for teasing her about it, but says she should try therapy.

In S15 E11, Mel is involved in a day of training in A&E, along with Fin. The pair are initially unsure about what they should be doing, but Mel soon gets involved with a young boy with something stuck on his arm. She manages to keep him calm whilst it is removed, then amuse him when waiting for his arm to be checked over by a doctor, showing her natural way with children.

At Christmas, Penny and Mel are called out in a snowstorm to a church in a rural area of Holby (S15 E17). The man in question is in a bad way and needs an emergency procedure performed if he is going to live. However, the ambulance is stuck in the snow, and Mel is forced to relay the difficult procedure to Penny via instructions given by Max over the phone. The pair work well together and they’re relieved when the procedure is a success.

In S15 E20, Penny confides to Mel that she wants to track down her real Dad, who she’s never met. Mel is supportive, however asks Penny if she thinks it will be worth the risk.

Mel is confronted by a barking dog in S15 E26, but manages to stay calm due to the therapy she is receiving. She tells herself firmly; ‘I am not afraid of dogs’ and manages to walk past the dog and deal with the situation well.

In Mel’s last episode, she is called out to a young girl who has fallen in a cave and been badly injured. Fin makes Mel wait outside while he goes in to find the girl. Mel tries to tell him that he should wait for cave rescue but Fin goes regardless.

Mel had no particular leaving storyline, and it appears the viewers are lead to believe that she left the department some time between the end of Series 15 and the beginning of Series 16 as the reason for her sudden departure is never mentioned!