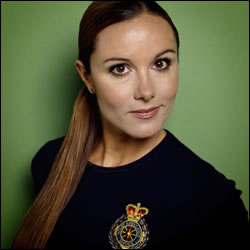 Right this is the church look… nearly there

Nina’s parents divorced when she was very young. Her mum met a Ukranian and when Nina was 13 they moved out there. She spent four years living with her mum, step-Dad and step-sister Ellen. At the age of 17, Nina decided to return to England to join the army where she worked as a Mechanical Engineer. She is loud, ambitious and fiercely independant. Nina has a feisty attitude but despite her bullish nature, Nina is energetic and her prescence is always felt.

Others often see Nina as too cocky and self-assured, it is hard to offend her and for this reason she forgets that other people are not as thick-skinned as her. She has a solid sense of what is right and wrong and argues her point to the bitter end – taking criticism is not her strong point. Nina has a flare for anything mechanical and loves to tinker and fix things. Nina always wants to win at everything she attempts.

Nina’s first shift is in S18 E41 and already manages to rub her colleagues up the wrong way. Things start off badly when she ignores her partner Comfort’s instructions and drives dangerously. The friction between the two grows when Nina eyes up Fin. Later they are called to Josh’s house after his ceiling collapses when he leaves the bath running. At the scene, Nina is rude to Josh before she realises he is her boss. In S18 E42, Nina and Fin attend to a man trapped in a sewer. Against Fin’s instructions Nina decides to go in alone to rescue him. Back at Holby, Fin reprimands her for breaking the rules. Comfort tells Fin that if he does not report her to Josh, she will. In S18 E43, Comfort tells Josh about Nina’s rule-breaking last episode. Josh reprimands Nina, telling her she must work as part of the team. An angry Nina tells Comfort that the only reason she has a problem with her is because she replaced her friend Nikki. In S18 E45, Nina chats up Abs at the party. They hit it off but she has to leave him to go with the ‘hens’ to another club.

In S20 E3, Nina is on a shout to the army base she once and talks a suicidal woman out of killing herself, by persuading her that there is life outside of the army. In S20 E4, after Bruno and Kelsey are doing a ‘sex survey’ in the department, Abs is shocked to learn Nina is far more experienced than him. In S20 E5, Sarah – a face from Nina’s past – comes to see her and it’s clear their previous relationship was as more than just friends. Sarah reveals she wants her back which leaves Nina in a dilemma. Nina breaks the news to Abs in S20 E6, and he doesn’t know how to handle the news. Following an incident at Sam’s party in S20 E7, Nina tells Sarah that she still loves Abs – the couple make up and realise they don’t want to lose eachother. In S20 E13, Abs confesses to Nina that he witnessed Guppy’s attack, unknowing it was him, but chose to walk on by because his mind was on Nina’s friendship with Kelsey. She is appalled. By Christmas, in S20 E16, Nina and Abs are sheepishly hoping they can put their differences aside but when Bruno makes a move on her and she rejects him, Bruno spreads a rumour they have slept together, which soon gets back to Abs. Abs confronts Nina who is so upset that he believed the rumours, that she dumps him. In S20 E18, Nina sees Abs compassionate side as he deals with a patient. As he tries to win her back, she says the need to have more fun in their relationship. To surprise her outside the ED department, he does the ‘Full Monty’ with a number of strippers. In S20 E20, when Ellen gives a reluctant Nina a lift to work and they come across an accident, their own relationship thaws. In S20 E24, although at first in doubt, Nina offers Ellen her support when she finds out she’s pregnant with Harry’s child. With Harry still in disbelief next episode, it is up to Nina to confirm to him the news. In S20 E30, Nina wakes up feeling frustrated with life. During a shout at a race track, Nina uses her army background training to good use when she rescues a runner from a sinking bog. Events lead Nina to ask Josh if she can train to become a paramedic. However when she later does a procedure she is not trained for, Josh tells her she must follow the rules if she is to succeed. In S20 E31, Nina learns from Ellen about her molar pregnancy and goes with her to her Oncology appointment where Ellen learns she has a form of cancer. In S20 E32, as the rest of the staff are unaware of Ellen’s cancer and come to their own assumptions, she breaks down infront of Nina as she fears for her future. Nina assures her she will be with her every step of the way. In S20 E34, Ellen tells Nina she will need a stronger form of chemo. She asks Nina to help her cut her hair short, before it falls out in clumps. The pair share an emotional moment as Nina does this for her step-sister. In S20 E35, Nina visits Ellen in an upstairs ward where she is putting on a brave face. In S20 E36, when Abs happens to come across Ellen on a ward, he is shocked to learn she has cancer and that Nina also knew but didn’t tell him. Nina is defensive but Abs shows his support. In S20 E41, Ellen surprises Nina and Abs by buying them a camper van to thank them for everything and suggests that they move back in together. In S20 E43, Abs looks jealous when new paramedic Greg playfully kisses Nina to prove he’s not gay. In S20 E44, during a shout, Nina steps in to punch a man, who is threatening Comfort. In S20 E45, Abs wants to spend some time with Nina but she is fed up with staying in and organises a party without telling him. He arrives home to find the party in full swing and, when the couple end up arguing, Nina tries to turn her attention to Greg, who rebuffs her. In S20 E46, Nina tells Abs that their relationship is over and he gets the wrong impression when he sees Greg comforting her. During her shift, she again breaks the rules when she helps a seriously ill man leave to return to his boat. When Josh confronts her later, thinking she is in trouble for this, she infact learns she is being suspended following her earlier assault on a patient. In S20 E47, during a meeting with Josh following her suspension, Nina says she will resign. However when she overhears on the radio about a barn fire, she defies her suspension and heads to the scene. Her frustration results in her entering the barn to help rescue a boy and as they lay trapped, she is forced to carry out a procedure, under Josh’ instruction, to help save his life. It’s a success and Nina is hailed a hero but she sticks with her decision to quit. At the party, whic his celebrating Ellen’s remission, the staff all have fun – except Abs who is clearly feeling the strain from his split with Nina. Nina meanwhile, enjoys singing at the karaoke. 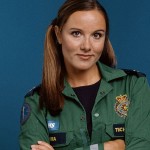 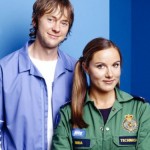 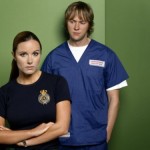 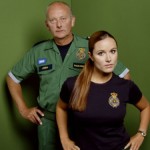 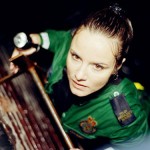 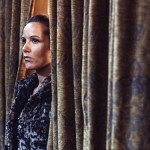 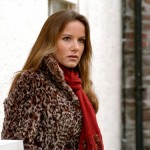 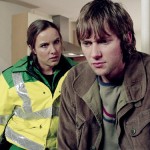 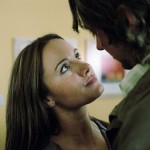 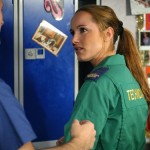 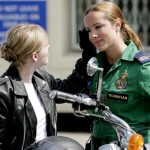 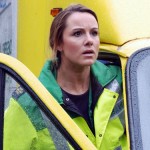 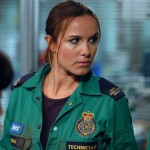 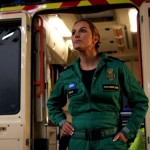 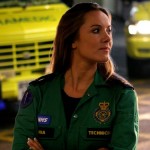 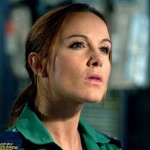 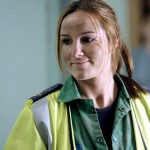 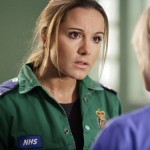 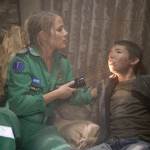 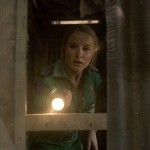