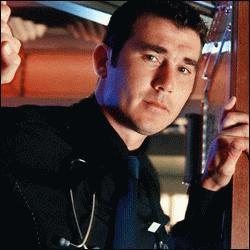 (car beeps him) Same to you!

Staff aren’t too pleased to see Medical Registrar Patrick Spiller when he arrives in S14 E15 – arrogant and cocky, although an excellent doctor – he knows it. He gets on with the medical side, but is not interested in the emotional side of caring for patients. A cyclist is brought in on his first shift following a hit and run – Sean remembers Patrick as the other driver, and is not impressed. There is also tension between himself and SHO Holly, as they used to date eachother – Patrick does ask her out for a drink on her birthday though in S14 E17, but she turns him down, and in S14 E19 Duffy also has a go at him for his poor attitude towards people. In S14 E20, Patrick, who believes everything has an explanation, is thrown when a man regains his sight after being blind for over 50 years. In S14 E21, Patrick treats a man who has a severe rectal bleed. There is a mix up with the blood, but the error is spotted in time – Patrick however fails to take any of the blame. In S14 E23, a young girl is brought in with a fish hook stuck in her hand – but she is scared by Patrick’s attitude, leaving Holly to calm her down. In S14 E25, Barney’s old friend Ewan come to him after being stabbed, but doesn’t want the police involved. When his condition worsens, Barney runs to A&E and begs Patrick to help, together they go back to the flat and treat him. Eventually Ewan is rushed to the hospital and taken to theatre. In S14 E26 a glamour artiste brings in her dog who has been bitten by a snake. Max injects the dog with anti venom, much to Patrick’s disapproval. Later the woman is bitten by the snake, but the last anti venom was used on the dog. Luckily another hospital sends one over. Out of character Patrick takes the dog home to look after!

His softer side also shows at the beginning of Series 15, when he lets homeless Spencer have his spare room. But the team still pull Patrick up on his moody attitude in S15 E2. In S15 E3, we see Patrick still has feelings towards Holly, when he acts jealously over he date with a journalist. In S15 E6, Charlie and Patrick help to deliver Leona’s baby. She calls her ‘Charlie Patricia’ (which she later changes). After Josh persuaded him in a previous episode, in S15 E8, Patrick joins him and Fin out on the road. Their first call is to a young woman who has fallen down stairs and put her arm through a glass door, during an argument. They also treat a tramp who has collapsed. Josh decides to take him to hospital, despite Patrick’s protests that he is merely drunk. Their next case is to an RTA, an old man is trapped in his car. The rescue operation takes some time, Patrick stays with him and talks to him, but sadly he dies, even Patrick shows some emotion. In S15 E13, Holly organises a Well Teddy Clinic for a group of local school children, one of the girls clings to Patrick. Patrick however is interested in the teacher and asks her out, only to find she’s choosing a wedding ring next week. In the snowy Christmas episode, Holly invites Patrick to have dinner with her and her friends, before their shift, he is his usual ‘happy’ self! As they travel back to A&E, Patrick’s car breaks down, and he also twists his ankle. Stranded, they head for a barn for shelter for the night, and cuddle together for warmth. Patrick reveals the reason why he hates Christmas – because his mother died at Christmas when he was just ten. In S15 E21, Patrick is helping Holly move house, when he is caught up with Spencer and held hostage, by a man whose pregnant daughter is dating one of Spencer’s old friends. They are held on a boat, where Holly rings him up on his mobile – he tries in code to explain where he is. Finally, they manage to escape. In S15 E24, a female medical student is shadowing Patrick, so he shows her his charms. Holly looks on unimpressed. When he gets round to asking her out, he’s in for a shock – she also dates women! Holly is becoming increasingly concerned over her mysterious stalker – when in S15 E26, she discovers things being moved in her flat – Patrick offers his support. In S15 E28, he gives her a lift home and they discover the stalker has been in her house and tidied up. Next episode as he goes to take her home after shift again, he finds his tyres have been slashed – Tom takes her home instead, and we realise he is the stalker. In S15 E32, Patrick gets off on the wrong foot with a retired Consultant, who Dan is hoping will donate some money to the department. The pair clash over a patient diagnosis, but eventually Patrick realises that he needs the Consultant’s skills and they successfully work on the patient together. In S15 E34, after Holly’s stalker ordeal, Patrick and Holly talk about their relationship, but they walk away from eachother not realising how the other feels. In S15 E35, Patrick acts jealously when an old colleague of Holly’s turns up. Tom also turns up and kidnaps Holly – when the team discover she is missing, they search for her. They find her unconscious in a disused part of the hospital – Patrick gives her mouth to mouth, and Holly comes round and the pair cuddle.