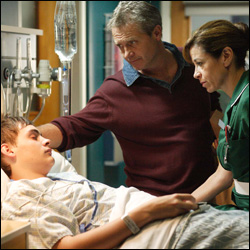 When Judith’s teenage son, Connor, is admitted to the hospital with alcohol poisoning, Mark does his best to support her. As Connor is stabilised, Mark helps Judith and ex-husband Paul reach an uneasy truce.

Penny is affronted when Elliot accuses her of being too close to Scott, but when Scott steps in to help her with an aggressive patient, she has to face the truth – Elliot is right.

Meanwhile, Maria wants to impress Daisha and go on a course to become a senior nurse. When Donna lets her down on the ward, Maria wonders why she remains so supportive to a friend who doesn’t really support her.

In this article:HC Series 12, Sonali Bhattacharyya