Michael is falling apart and his desperate plea for reconciliation with Annalese forces her to make the ultimate admission – that she’s been seeing Ric. Michael confronts Ric about his betrayal, but gets a surprise when Ric reveals that he has cancer.

On the day that Penny becomes an F2, she and Sacha must deal with an emergency. Penny wants to prove her worth, but when a child dies she has serious doubts about her chosen profession. However, Frieda’s plain talking makes Penny face up to her responsibilities.

When Joseph learns that Faye and Linden are finished as a couple, he still wants a divorce. But when Faye has a pregnancy scare, he puts his acrimony aside for the sake of their unborn child. Joseph convinces Faye to test for Lowes and assures her that whatever the outcome, he will be a father to the baby.

In this article:HC Series 12, Tim Price 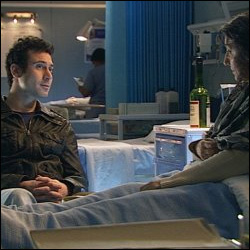 S25 E31 (9 Apr 11) : Starting Over by Tim Price Episode Summary Jay struggles to cope with work as he returns from his...