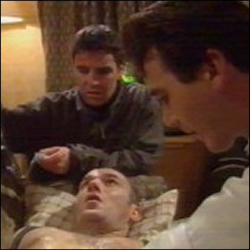 Ewen Campbell parks his car in a reserved space in the hospital car park. Patrick parks behind him yells at him that he can’t park there; Ewen ignores him. Patrick goes into work and is soon arguing with Duffy about a drug he thinks should be available in A&E. Duffy says that Max decided it wasn’t worth it as it’s expensive and the drug can be administered on the ward. She says Patrick should take it up with Max when he’s back from compassion leave. Later she overhears Patrick ordering the drug. She tells him he hasn’t got the authority and he’s out of order. Patrick says he’s only doing what’s best for the patient.

As he is on his way to work, Barney realises that he has forgotten to bring a form that is due in today. He goes back to his flat. Ewen Campbell follows him. As he reaches his flat Ewen shows himself and greets Barney. He is an old friend of Barney’s – Barney is surprised to see him. Barney lets him into his flat and tells him to make himself a cup of tea as he has to get to work. He hugs Ewen and leaves. Outside, he notices blood on his sleeve. He goes back in and finds Ewen in the bathroom. Ewen says he has been stabbed. He asks Barney to help him; Barney says he needs to go to hospital. Ewen refuses to go, saying that the police will find him if he does. Barney realises Ewen wasn’t just an innocent victim. Ewen says he was doing someone a favour and it went wrong. He says he has gear in his car and tells Barney that one of the doctors saw him getting out of the car; he says that with his record he’ll be put away if the police find him. Barney says he could die if he doesn’t go to hospital. Ewen refuses, so Barney agrees to do what he can. He goes into work, and grabs some things he needs. Duffy sees him and asks him to treat a patient; Barney does so as quickly as possible, then goes back to his flat. He does what he can for Ewen, then goes back to work.

Fifteen-year-old Tessa Simpson is brought into A&E after collapsing during her dancing class. Her dancing teacher Joan Bannville comes with her; she wants Tessa to be back at dancing class as soon as possible. Tessa is reluctant to talk. Mrs. Bannville says that Tessa’s parents aren’t around; her brother Geoff looks after her. Geoff comes in and immediately starts blaming Mrs. Bannville for Tessa’s collapse – he says she pushes Tessa too hard. They start arguing and are upsetting Tessa, so Holly tells them to leave. Tessa tells Chloe that Mrs. Bannville was her mum’s best friend; she wants to be a dancer because that’s what her mum wanted. They discover that Tessa’s kidneys aren’t working properly; they suggest that Tessa has not been eating, to lose weight, but Geoff says she eats her meals. He blames Mrs. Bannville for putting pressure on Tessa; she says he should be looking after her better. Chloe asks Tessa if she’s been taking diet pills; she confesses that she has. She says there’s a big dance competition coming up and she wanted to be at her best. She asks if she can start dancing again next week when she is out of hospital. Mrs. Bannville says that it would probably be a good idea for her to have some time off to recover first. Tessa says she wants to dance. As she is taken to the ward, Mrs. Bannville asks Holly if Tessa will ever dance again. Holly says she doesn’t know; she says Tessa needs to want to get well, and it can take a long time.

Holly says Sean’s been looking happier recently; he tells her about him and Tina. Patrick tricks Sean into telling him that Adam is HIV positive.

Penny is taking a diving course. Her instructor is Mick Carter; his son Lee is with them and so is Cara. Mick and Lee had been planning to do a dive in the Red Sea; Mick invites Cara along and she agrees. They dive off the boat. When they are down there, Cara’s goggles start to come loose. She tries to clear them but fails. Mick, her partner, is getting further away from her. She starts to panic and drops her oxygen mask. Mick sees her and comes to help, but she is panicking completely and won’t take the oxygen. She propels herself to the surface very quickly; the rapid ascent has made her very ill. Penny and the others get to the surface and manage to get Cara back into the boat. They are about to head back to get some oxygen for Cara when they realise Mick is missing. Lee dives back down to look for him. He brings him back to the surface. Mick is still breathing but is very ill; Penny thinks he has had an MI. They head back to the shore, and Penny gives Cara the oxygen. Lee phones for an ambulance. Josh and Finlay arrive. Cara and Mick are taken to A&E. On the way, Mick arrests. They shock him and his heart starts again.

Patrick is dressed to go to a posh dinner when the call comes through about the diving incident. He stays and treats Mick. Mick will live but he won’t dive again for a long time, and he’ll have to take it easy. Lee tells Penny that he’ll stay to run his dad’s diving school instead of going off to university – he says he can go to uni in a few years if he wants.

Barney, back at work, gets a phone call from Ewen, who is feeling very ill. Barney rushes back to his flat. He is about to call an ambulance when Ewen snatches the phone from him and throws it against the wall. Barney is struggling with Ewen when Ewen collapses. Barney tries to phone for help but the phone is broken. He goes outside and tries to attract the attention of one of his neighbours to get help, but no one will help him. Barney runs back to the hospital and runs into Patrick’s car as he is leaving. Barney tells Patrick there’s a man dying in his flat, and asks him to come and help. Patrick drives Barney to the flat and phones for an ambulance on his mobile. Patrick treats Ewen before the ambulance arrives. He is taken to A&E. Barney says he doesn’t know anything about him apart from that he was stabbed this morning. Ewen is stabilised and taken up to theatre. Patrick later tells Barney he risked his career for Ewen. Barney says he’s an old friend, and if he loses his job, so be it. Patrick says they’ll keep it between themselves. Barney thanks him.

– Tessa Simpson, a 15-year-old girl who collapses in dance class

– Mick Carter, a 45-year-old man with a diving company, MI and mildly hypothermic

[A ambulance stops outside A&E. Barney is walking into work, listening to music on his walkman.]

[Patrick and Barney are leaving for the day.]

Patrick: You risked your career for him.

Barney: He’s an old friend. Where I come from that still means something. If I lose my job, so be it.

Patrick: I think we can keep this one between us.

Barney: He’s not gonna see it that way, wife and kids to support.

Patrick: I wish they’re gonna be grateful that they don’t have a funeral to organise.

[Barney nods and Patrick walks away.]

Barney: Yeah, you will.

In this article:Andrew Rattenbury, Cas Series 14 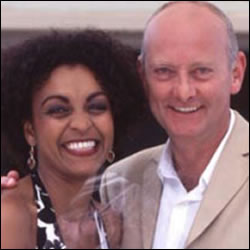