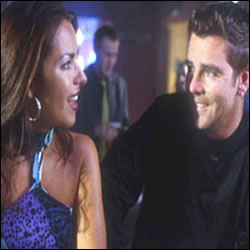 Linda Wells wakes up in her son’s bedroom; it is clear that all is not well between her and her husband, Michael. He prepares her a cup of tea and promises their son David to take him Christmas shopping at the weekend. Linda comes into the kitchen. Michael comments on how smartly dressed she is. She refuses the tea he has made for her. Michael gets angry and tells her that the have to sort things out. When Linda does not respond he gets angry, throws her tea into the sink and storms out. She starts driving somewhere but suddenly stops the car. She pulls over, opens the door and is violently sick. Penny and Mel appear and take her to Holby General. Andrew examines her and she asks him to contact David’s school, claiming that her husband is dead. She later asks Andrew if it is possible that she has been poisoned. Outside the cubicle, Andrew expresses his concerns to Barney but explains that he cannot really perform the poison tests she wants.

Michael arrives in the department with David after his son’s school phoned him at work. Andrew tells Linda that the results of the tests he has performed indicate that she simply has gastroenteritis. He tentatively asks why Linda felt she was being poisoned but she is not forthcoming. Barney comes into the cubicle and says that there appears to have been a misunderstanding – there is a man in reception claiming to be Linda’s husband. She tells them that it must be ‘the man who lives in our house.’ She concedes that he looks like Michael but is not her husband and insists that she will only see David, not ‘the man’.In the relatives room Michael demands to know what is going on. Andrew suggests that David should go and se his mother whilst he explains the situation to Michael. Michael tells him that he and Linda were in a car accident whilst they were driving home from the airport after their second honeymoon a month previously. Linda was knocked unconscious and ‘has not been the same since’. Their GP believed she was suffering from post-concussion stress but she had been treating Michael very strangely and had since become convinced that he was not really he husband. She has been sleeping in David’s bedroom and attempted to convince him that Michael was not really his dad. Andrew decides to call in the psychiatric registrar.

Linda agrees to talk to the psychiatrist but during the consultation she becomes impatient as she firmly believes that her husband was killed in the RTA. When asked she says that she didn’t go to his funeral because there hasn’t been one yet. She misses him very much and doesn’t know who the man in the house is – he is not her husband but, yes, he does look very like him. She concludes that he must be an impostor who has ‘replaced’ her husband. She was on her way for a job interview this morning because, although ‘the man’ has offered she doesn’t feel that she can take money from him. Outside the cubicle the psychiatrist tells Andrew and Barney that he believes Linda is suffering from an extremely rare condition called Cap Gras delusion. Whilst it is not clearly understood he believes that it is caused by damage to the pathways behind the eye to the brain so that the patient recognises a person but no emotional response is triggered; they believe that their loved one has been replaced by an exact replica. It is possible that Linda sustained damage to this path when she was knocked unconscious. Andrew and the psychiatrist take Michael to Linda. He tries to convince her who he is but she is unresponsive. He shows her photos from their holiday which she can remember. However, when shown a picture of Michael she tells Andrew that that is her husband and ‘this man’ isn’t the same, not the man she loved. Michael breaks down in tears.

Jill Wharton is brought into reception by two friends following an all night rave. She is suffering from chest pins and is having difficulty breathing. Her friends are not sure if she has taken any drugs. Whilst Patrick is examining her they both run off, leaving her. Patrick’s initial diagnosis is a cardiac arrhythmia and he too believes that she has been taking drugs, even though Jill herself denies it. Jill’s sister Cheryl arrives and she too assumes that she has taken something because it is early in the morning and she must therefore have been at a rave. It is clear that they have a less than close relationship and Jill asks Cheryl if she has merely come to confirm her suspicions about her. As Jill becomes anxious, Chloe asks Cheryl to leave and she storms out of resus. Spencer later finds Cheryl in the corridor and remarks that Jill thought that she had left. Cheryl says that she will come back later as Jill is in good hands and doesn’t need her.

Patrick tells Colette that he thinks he has worked out what is wrong with Jill. He explains to Jill that he is referring her to the Coronary Care Unit (CCU) but that he believes she has a condition called cardiac myopathy which involves a weakening of the heart muscles. As Jill is taken up to CCU, Colette says that she will contact Cheryl. Jill says that there is no point – they will only end up arguing. She goes on to explain that their parents died when she was thirteen and Cheryl had to bring her up.

Patrick explains the test to Cheryl who starts crying. She tells her side of the story; she only wanted the best for Jill and has pressured her to succeed. She believed she was taking drugs and now feels guilty that she wasn’t there for Jill. She resented her because she had to give up her own teenage years so Jill could have hers. Colette persuades her that Jill does need her and Cheryl goes up to CCU. She sees her sister in the ward and nearly doesn’t go in. Jill tells Cheryl that she is as much to blame, her sister thought she was taking drugs and when Jill was out with her friends she would pretend to take drugs in order to be accepted. They agree that they have distanced themselves from each other and things must change.

Joanna Sykes enters the coach station in search of her ex-boyfriend Duncan Edwards. She finds him waiting for a coach and insists that they must talk. Duncan tells her that he is going to Scotland for Christmas and may stay there. Jo walks off stunned. As Duncan is loading his bag onto the coach Jo tries to plead with him. As he boards the bus she shakes his hand. Duncan tries to pull away but can’t – she has put superglue on her hand and they are now stuck together. They arrive in A&E still joined together. Jo finds the situation funny but Duncan is clearly not amused. He refuses to speak to her and is not impressed to discover that the waiting time is four hours. In the cubicle Chloe tries to separate their hands. Joanna explains that she had to end their relationship because she was scared that Duncan was getting heavy. He is incredulous because he believed she was sleeping with a mutual friend. She convinces him that she was not and they leave the department hand in hand.

Dan approaches Holly in the department and asks Holly for a brief word in private. They agree to meet later as Dan has to go to a meeting. His meeting turns out to be a game of squash against Patrick. Patrick is naturally convinced that he will win easily but has a nasty surprise when Dan beats him easily, without breaking into a sweat. They arrive back in the department where Holly is waiting for Dan. Patrick is not happy as they disappear off to Dan’s office. In the office Dan invites Holly to help organise a mock incident to test out the major incident plan.

Colette tells Chloe that they are in charge of the department that shift as Duffy is off work. Colette later asks Andrew how Duffy is. He remarks that she is not normally this bad and Colette assumes that he knows about the pregnancy. When she realises that he doesn’t she is fortunately able to cover it up.

Barney tentatively approaches Chloe to ask for the drug cabinet keys. He apologises for having a go at her about Spencer. Chloe accepts the apology. He offers to buy her a drink later and kisses her on the cheek. After the shift Barney joins the girls in a club. He goes over to Chloe at the bar and is concerned that she is being bothered by two other men. He later sees the men spiking Chloe’s drinks and confronts them. The argue and Barney attacks one of them. They are thrown out of the club. The girls try to restrain Barney but the men taunt him and as the police arrive he goes for them again. He is taken away in a police car.

In this article:Cas Series 15, Clive Dawson 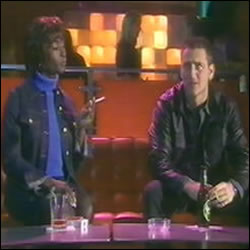 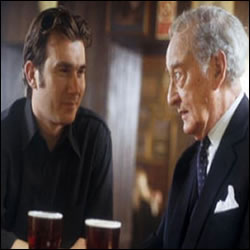 S15 E32 (31 Mar 01) : Heroes and Villains by Carolyn Sally Jones Episode Summary Penny arrives at work and is told that she has... 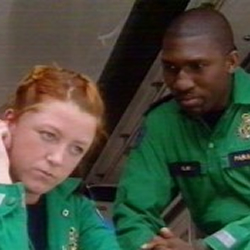 S15 E10 (4 Nov 00) : States of Shock by Susan Boyd Episode Summary Duffy returns to work after a weekend away with Andrew. She...