Lara has hit DI David Collier over the head with a brick, and he is lying unconscious on top of her. She calls for an ambulance. Josh and Nikki bring him in to Resus, meanwhile Colette treats Lara – who admits he tried to rape her. Lara is examined and questioned at the police station, where she explains how he had previously raped his wife.

Nikki has her appraisal with Josh, but is unhappy with his comments of her not pulling her weight. On shift, she treats a patient, Brad, who has had a suspected heart attack due to work stress. In Resus, Brad tells her she is wasted as a paramedic and offers her twice the salary to become his PA. After more bad comments from Josh, she hands him her resignation and goes to look for Brad. But she finds out he has died – Josh tears up her resignation, saying he won’t let her give up that easily.

Roxanne, preparing to be Simon’s guest at his brother’s wedding, is shocked when her mother turns up in the department with her baby, Nicole. She tells Roxanne that she has to face up to her responsibilities as a mother and hands over Nicole. Determined to go to the wedding, Roxanne, failing to get a babysitter, hides Nicole in the porters lodge. However, Spencer finds the baby and Dillon confronts her. Roxanne is then forced to admit the truth and the team are surprised.

After Claire tells Stuart that he doesn’t want to marry him and that she loves Simon, Stuart pays him a visit at work and punches him. He tells him he’s fed up of living in his shadow and says he is no longer his brother. Simon now hopes that him and Claire can be together and tells her that he lied about not loving her. Claire angrily calls him a coward.

72 year old cyclist, Bernard, comes in with chest pains and collapses in reception. Simon discovers he has a thorasic aneurysm, but is told by Harry that he is unlikely to be allowed an operation because of his age. An angry Simon confronts surgeon Anton Meyer – who stands his ground and tells him to stop wasting the little time Bernard has left and tell him the truth. Simon tells Bernard he will die shortly – he thanks him for preparing him for the news.

Lara returns to A&E to see how David is doing, he is seriously ill and about to go up to theatre – she urges Harry not to let him die.

* David Collier – unconscious after being hit on head with brick

David is lying unconscious on top of Lara – she has hit him with a brick.

Harry : We’re taking him into theatre

* George Irving appears in this episode as Dr Anton Meyer.

In this article:Cas Series 16, Stuart Morris 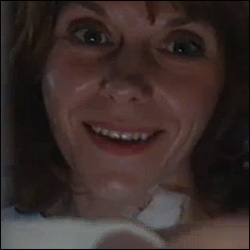