It’s Ellen’s first day at work and she settles in well, but it’s obvious that her relationship with her step-sister, Nina, is strained, as the medical drama continues.

When Nina complains to Claire that her flatmates are noisy, Claire suggests that Nina move in with her. Later, Nina tells Ellen that she can move into her old flat – but her plan backfires when Claire lets slip the reason why Nina was desperate to move out. Ellen hints to Abs that she has nowhere to live and, much to Nina’s annoyance, he offers her his spare room for a few days.

Fin is hailed as a hero for saving the schoolchildren last week and, when Josh arranges for a journalist and photographer to come to the hospital, he reluctantly goes along with it. But Karl, the man whose wife died when Fin was busy helping the children, finds out and calls Fin a killer in front of the press.

Bex tells Tess that she has another dental appointment and has to leave work for a few hours that afternoon. Meanwhile, it’s Selena’s first day as the new doctor but, realising she has forgotten her hepatitis B vaccination certificate, she goes home to get it. She gets a nasty shock when she catches her husband, [ID 1498]Will[/ID], there… with Bex. 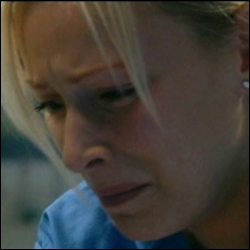