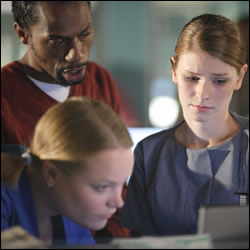 It’s the morning after the night before and Adam sleepily says goodbye to a woman he met in a bar. He thanks her for a fantastic night, and she quickly leaves. Neither imagines their paths will cross again, or so soon.The new agency nurse, Jessica, arrives at the ED for her first shift. Tess is disappointed to be getting only one agency nurse and, on top of that, Jessica hasn’t worked in ED for five years – they don’t get off to a good start. Tess is too busy to spend time showing Jessica the ropes, but Jessica proves herself a fast worker and a quick learner.

Jessica and Adam are surprised to see each other again, but are forced to work together. Adam is initially cold, but Jessica is calm and professional – albeit unnerved by the situation. Jessica’s expertise impresses both Tess and Adam.

Meanwhile, Ruth has to deal with a distressing suicide case. She battles desperately to save the patient, but can’t, and, through no fault of her own, the patient dies. Ruth bravely faces the patient’s wife, Suki, to tell her the news. She reveals that her own mother committed suicide many years ago, and understands what Suki’s going through.

To say thank you for all her help and support, Toby later asks Maggie out for dinner, but he also invites Ruth along. Maggie tries to hide her disappointment and pretends to be delighted. Ruth, however, declines the invitation. As she gets ready to go out, Maggie is shocked when her daughter, Joanne, turns up – heavily pregnant.Greg has had a bad day and, when Tess has a go at him for asking one of her staff to baby-sit him, he goes mad. He is called to another shout, which again seems to be a waste of time. It’s a little girl, Ruby, who has a sore arm, but her mother makes Greg realise it’s not their fault he’s having a bad day.

In this article:Cas Series 22, Rachel Flowerday