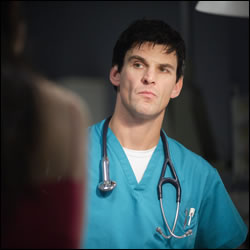 A 10-year-old girl is brought into the ED with a fracture. She is discharged, but later returns with fractured ribs. Jessica has concerns about the girl, but Ruth thinks there may be a reason for the injuries. The girl’s over-protective mum, Karen, however, doesn’t believe there is anything wrong.

Elsewhere, a stag night gets under way in a strip club. Sam Baxter, the stag, and his friends, Ryan and Al, are downing drinks and Sam chats up a girl – to the sounds of cheers from his mates. As Sam leaves the club, however, a figure watches in the darkness and his mates later find him curled up, unconscious and bleeding.

The ED, meanwhile, is in chaos as Tess vomits everywhere and has to be sent home. More staff fall sick, and Charlie and Abs try to discover the cause – believing it to be Norovirus.

Throughout the night shift, Adam flirts with Jessica and suggests they have breakfast together. Jessica almost agrees but, at the last minute, can’t make it.

In this article:Cas Series 22, Mark Cairns 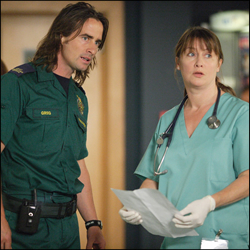