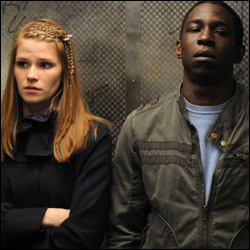 Jessica and Sean clash over their move to Saudi Arabia. Jessica is feeling the strain of being pregnant and has an all-round terrible day – especially when Adam tells her that they never would have worked as a couple.

Later, a weary Jessica arrives home and, as she climbs the stairs, she blacks out and falls over the banister. Whilst hanging on, Jessica makes a split-second decision and lets go – falling to the ground in the process.

Toby, meanwhile, discovers from Kelsey that rumours about his night with Ben have spread. He asks her to quash them, despite her assurances that no one really cares about his sexuality.

Elsewhere, Ruth continues to rail against Jordan for not getting the surgical rotation. He tells her that while she may be competent, it is her attitude and people skills which are letting her down.

Alex is later brought into the Emergency Department (ED) after suffering burns whilst attempting to cook and is angry when Adam tries to take control of his life.

In this article:Cas Series 23, Paul Logue