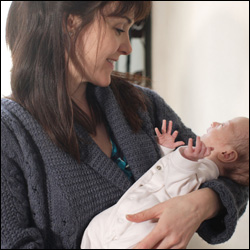 A furious Adam tenders his resignation, citing his concerns about Jordan in his letter to the board. However, Jordan reveals he will counter Adam’s claims by telling the board he is emotionally unfit to practice and has come to work under the influence of alcohol. Adam, thinking he is defeated, is forced to step back from resuscitation when his patient, Margaret, is rushed in. He then comes to the rescue when Jordan freezes in the middle of life-saving treatment.

Meanwhile, Curtis is reluctant to testify against Tony, despite witnessing the devastation that Tony’s drug trade has caused. However, when he asks Alice to marry him, she only agrees if he will testify, despite knowing that Tony will be out for revenge.

Jessica is discharged with baby Harry and has a shock when Maureen arrives. Jessica is suspicious but allows her back home. Her mother-in-law then tells her that Sean is due to call. All is not what it seems…

In this article:Cas Series 23, Paul Logue