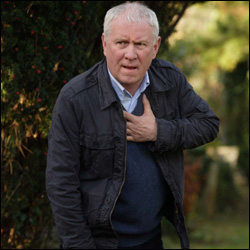 Lovers Julie and Martin kiss passionately, unaware they’re being photographed by private investigator Norman. On catching sight of him, Julie gives chase and Norman is injured as she snatches his camera. She is determined to persuade Norman not to use the pictures, but could the private investigator be the one to make her see the error of her ways?

Meanwhile, Dixie’s sick father, Arthur, decides to spend some quality time with his daughter, which causes problems for the paramedic as she’s never revealed her true sexuality. Determined not to disappoint her father, Dixie has a surprising proposition for sparring partner Jeff.

When Zoe doesn’t turn up for a shift, Jordan is furious and gives the medic a piece of his mind. Out for revenge, Zoe fills in a patient comment form and doesn’t hold back on her thoughts. Tensions mount when, disgusted by Zoe’s attitude, Jordan decides to confront her.

It’s an important match day for the ED soccer team and when their star player pulls out, Adam steps into the breach. But it soon becomes clear that Adam’s problems off the pitch are affecting his play – to the detriment of the opposing team members.

Charlie is horrified to find that Shona has broken into Louis’s house and even more disturbed to discover that she uses drugs. But matters go from bad to worse when, after confronting the drunken girl, Charlie crashes his car…

In this article:Cas Series 24, Paul Logue