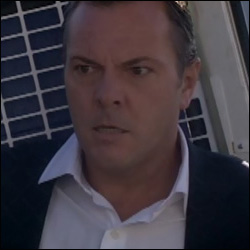 Kirsty’s bruising secret is about to be uncovered by Adam, Jordan is kidnapped at knife-point and Ruth’s behaviour worries Tess.

Kirsty is feeling the effects of Warren’s latest beating. Adam is suspicious and concerned but she refuses to be drawn about the cause of her aching back. Suspecting possible fractures, Kirsty secretly arranges an X-ray on her injuries but Adam discovers the results first and confronts her about Warren’s abuse. Warren later arrives with flowers for Kirsty and Adam tries to play it cool, but when Kirsty arrives home to find Warren waiting alone, she is terrified that trouble is brewing.

Jordan is forced into the back of a van at knifepoint by Liam, who drives him to a disused warehouse where Britney Carter (the cyclist from the car accident in last week’s episode) has been stabbed in the neck.

She refuses to go to hospital in case the gang who attacked her tracks them down. Although Jordan manages to stabilise her, he warns Britney that she could die in an instant and she agrees to go to the ED while Liam flees. Henry is impressed with Jordan’s dedication and surgical work in such difficult circumstances but will he change his mind and open the surgical position to an application from Jordan?

Meanwhile, Tess tries to convince the gang that they should offer Ruth some support after what happened with Edward. But Ruth, tyrannical as ever, becomes obsessed over a missing audit book. Tess finds it, but instead of facts and figures, it is filled with ramblings and doodles…

In this article:Cas Series 25, Paul Logue