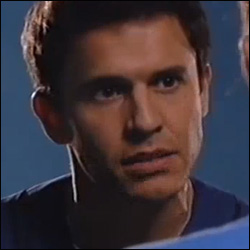 The episode opens with Owen walking in to the ward and dumping Chrissie’s things into her office. Sandy sees him and asks how Chrissie is.

Things are going on in maternity, a lady, Donna, is giving birth, Lisa has to leave to go to an interview on AAU.

Danny gives Sandy £300 to give to Sean to pay off her debts, she accepts but reluctantly, she later steals a watch from a dead patient.

Back on the ward, Ed sees Chrissie and asks how she is, she tells him about Owen chucking her out, he offers her a place to stay, but she just walks out the room.

Anne Ludly is a patient of Ed and Tom’s; she comes in with her daughter Jenny and husband Roger.

Meanwhile on AAU a young girl with a baby (Jamie) comes in, her name is Bev and she has let a burn get infected on her arm. She appears quite forgetful.

Back on Maternity Donna has successfully given birth to a baby, but the sex of the baby is unknown. Her mother-in-law blames her.

Sean has turned up to see Sandy, he wants the money, she gives him what she has, but he threatens her and tells her it isn’t enough and if she doesn’t get the rest of it by the end of the day then he will go to the police. Sandy looks very upset.

Tom and Ed run some tests on Anne, confirming that she has cancer. An operation is one suggested option. They decide to operate as soon as possible.

Tom then goes to see a councillor, Anita Forbes; they talk about his alcohol addiction, and the fact that he’s a recovering alcoholic. Though he lies about the situation, though she guesses as much! They say they will meet same time next week.

Ben goes to see Tony, everything seems ok, Tony seems quite positive about the future, he doesn’t want to think about the past.

Meanwhile on AAU Lisa is interviewed by Steve, everything seems to go well for her; she just has to wait for the results now.

Back on the ward upstairs, Chrissie feels pains in her stomach, Sandy tells her to go and get checked out.

On maternity Donna’s baby is a girl (Sophie) and a doctor from SCABU explains her condition and that it is perfectly treatable, though later in life she will probably need an operation.

Back on AAU Jess and Lisa talk about Bev and the possible conditions she could have. Jess then calls Anita to come and talk to her. Bev gets the idea that Social Services will be called as well.

Chrissie and Owen talk, she says that Ed was a mistake and that she just wants to focus on her and Owen and the baby now. Owen just shouts back at her that she doesn’t even know whose baby it is. She then tells Owen about the pains, and he does a scan to make sure everything’s ok, he also does a blood test. It turns out that the scan is all ok; Chrissie suggests that they meet after work to talk, Owen rejects the idea.

Back on the ward, Anne is taken for her operation; Tom says they’ll do everything they can. In theatre Tom and Ed chat about Anita, they begin the operation, they discover that the cancer has spread, they take a sample, but Anne arrests, though she is resuscitated.

While the operation is going on Roger tells Jenny that looking after Anne is hard, but he’ll continue to look after until the end.

In the sister’s office Danny catches Sandy stealing, he tells her to put what she has taken back; she does, but brakes down and cries!! Danny hugs her, though he can’t believe how bad things have got for her, he tells her to meet Sean outside later and to just trust him that it all be ok.

Ben visits Tony and tells him that its over between them, they both look upset; Tony says he wants to try again but Ben tells him he doesn’t love him enough.

Back on AAU Bev’s condition is diagnosed, she has a behavioural disorder. Later Lisa finds out she has got the AAU job, she’s really pleased. Though when she goes to tell Owen he’s not so pleased, he doesn’t really want her to leave.

Tom tells Roger that Anne’s cancer has spread, they cant do anything else.

Sandy then goes to meet Sean; she tells him that she’s not giving him anymore money, or anything. Danny comes and there is a fight, Sean walks away, but is this the last we will see of him?

Back on the ward Chrissie is in her office, looking at a necklace that Owen gave her, Ed walks in, Chrissie gets upset, they hug, but Owen sees them. He bursts in through the door, shouting at them both. He makes a comment about Ed’s father being in prison, Ed seems furious. Tom comes and breaks up the argument, Owen goes back to maternity, leaving everyone looking at Chrissie and Ed, now everyone knows. Tom later offers Ed a place to talk; Ed just says he doesn’t want to talk about it.

The episode ends with Chrissie crying in the office, and Owen looking out of his office window.

In this article:HC Series 5, Julie Watson

S5 E31 (6 May 03) : Going It Alone by Johanne McAndrew Episode Summary Lisa begins her shift in AAU. She talks to Jess about...