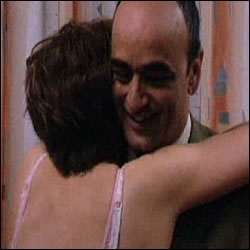 Chrissie speaks to Tom on her first proper day back. He see’s Alex and they discuss his future. Chrissie offers him her office to work in for the day as Kath is away for the day. Tom and Diane talk and she apologises. Sandy is late and comes in with Nic and a bunch of flowers. Sandy speaks to Jess and Lisa about Nic. Nic is told by Tom why he is having trouble getting in – he’s using a library card rather then his work card. Chrissie scolds Sandy for her flowers since they belong on the ward with the patients. Sandy then smiles and hands them to Chrissie saying they’re for her. Chrissie still insist’s they go on the ward as she doesn’t want anyone’s sympathy. Sandy leaves a box for Chrissie in her office even though Chrissie has told her to throw it away. Chrissie admits a patient on Darwin who turns out to be pregnant. Chrissie tries to stop it from affecting her. Alex tries talking to Ethan about his problem. Ethan leaves him alone. Anita gives Tom her reports and they go to the meeting. Alex offers Chrissie someone to talk too. Tom tells Alex he’s been moved to out patients. Nic and Sandy talk although she is working with Jess and Lisa to give him a hard time for the house warming party. Lisa and Jess tease Nic. He shouts at them since he never wanted to kiss them, only Sandy. Ed tells Alex he’s sorry. Ed tells Alex he’s sorry. Ed asks Chrissie if she’s okay. Mubbs see’s a patient about a termination although she almost lost the baby earlier. Chrissie opens the parcel Sandy left in her office. It’s a two way baby carrier which she would have used for Amanda. She begins crying at her loss of Amanda. Diane see’s Tom and they discuss Alex before she asks him to go to paris with her. Nic and Sandy kiss as they see a couple get back together.

Zubin examines Elizabeth and decides to help her. Zubin helps Elizabeth with her back. She’s taken for her biopsy. Zubin goes to another operation. Zubin tells Elizabeth he can’t be her doctor anymore because she’s more then a patient to her. He asks her to go out with him for a meal. The two of them go to a restuarant together. They then go to a hotel where they begin kissing before sleeping together. Zubin speaks about them going to his. Someone phones Elizabeth, Zubin realises it’s her ex Anthony. She walks out crying as the two disagree on seeing each other again.

Donald Holloway – A patient on Darwin who Sandy and Nic help get back with his partner.

Louise Farley – Chrissie’s patient who is pregnant but needs to undergo surgery.

* This episode’s origional transmission was preceded by the announcement of Laura Sadler’s death, read over a still of Sandy.

In this article:HC Series 5, Paul Coates 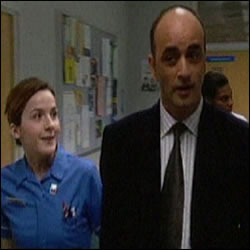 S5 E37 (17 Jun 03) : Private Lives by Tony McHale Episode Summary This episode was the one in which we first met Zubin...

S5 E16 (21 Jan 03) : A Right to Know by Johanne McAndrew Episode Summary Kath’s already back at work, something that Danny reprimands her...