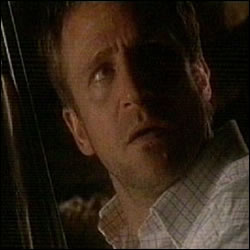 Alex turns up at the farm house. He see’s the hurst with his father’s coffin in it. Alex looks at his hand then continues to drive on to the church where he parks and Alex goes in as his brother speaks. Alex walks out and then says goodbye. As the congregation leave Alex and his brother, Peter, talk but disagree. Alex’s nephew looks at Alex’s car and asks Alex questions about it. Alex takes his sister in law, Jenny, and nephew, Simon, home to the farm. Alex tells his Simon about his Parkinsons and what it’s like at the hospital as they stand in the horse barn. Alex helps Peter with the hay bales whilst Jess and Diane drive down there. Jess and Diane stop at the graveyard and see the grave of Alex’s dad, and also his sister, Ella. Alex argues with his brother again about selling the farm and his dad’s shotgun. Alex takes his dad’s shotgun. He loads it in his dad’s old room when Jenny comes in. The two talk about the past and what they have now and the pair kiss before Jenny says she’s right with Peter. Jess and Diane turn up and meet Jenny. Alex saves Simon when he has difficulties swimming in the lake. Even though Jenny tried to assure Alex it was safe to swim down there and to stop thinking about Ella drowning in there – although she died through commiting suicide. Jenny shows Diane the gun that Alex had and also admits she’s pregnant. Jess goes down the the lake where Alex sits alone soaked through and thinking after Simon ran off and shouted at Alex. Jess speaks to Alex and admits she loved him and wanted to die after the baby. She storms off and leaves Alex. Alex goes into the house and argues with Peter in front of Diane and Jess. He leaves and goes to sit in the barn. He takes his dad’s shotgun with him. Simon goes into the house, after spying at Alex through a gap in the barn door, and tells them Alex is in the barn with the shotgun. Diane rushes out and talks to Alex telling him Jenny’s pregnant. Diane tries to get Alex to go back with her. Diane talks about Ella and how selfish he would be. Alex breaks down, Diane takes the gun from him and holds him. As he comes out, Jess, Peter, Jenny and Simon are waiting for him. Alex and Peter make up so do Alex and Simon as they head back inside the house.

Jess admits a patient to AAU who Ric sees. Nic says to Kelly abouy doing a course so he can be something more then a HCA. Jess reads the letter Alex has written saying sorry and goodbye. Ric tells her he’s at his fathers funeral when she asks when he will be in. Diane is told by Ric about Alex and Diane speaks to Jess. They decide to go after Alex to the farm when they’ve spoken. Kelly is covering for Kath on her day off and doesn’t see why everyone make’s such a fuss about lots of work. Ric and Zubin are operating, reminiscing about their past.

-Alison Burton, a young woman with cancer. She needs surgery, but her sister does not want her to have any because their mother died from a heart attack during surgery. In theatre everything seems to go well until Alison’s heart starts playing up, but luckily they can solve it by giving her a temporary pacemaker.

[Alex is on the way to his father’s funeral. He stops the car for a while and looks over the fields. He looks at his hand that is shaking and thinks about taking medication, but throws the jar away.]

[Alex and Diane come out of the barn and everyone else is waiting outside, teary.]

[Slowly they all walk away] 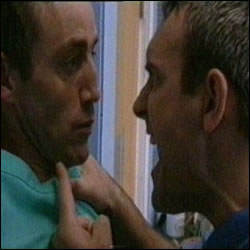