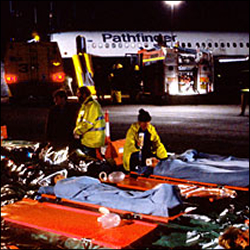 Holby A&E is on red alert, after a plane returning from Greece crashes into an embankment after the flaps jammed. The team are off duty enjoying Beth’s leaving party but are soon called back, to help with the casualties.

Julian and Ash are called to the scene to assist with the many injuries, patients include a father, Tim and his seven year old daughter, Larissa, who suffers head injuries. Senior doctor, Hal, removes a clot from her brain in theatre. Tim, who suffers minor cuts, feels guilty, Jimmy discovers he took her out the country without the mother’s permission.

One of the pilots, Graham, has a lever control stuck through his chest, Julian intubates him at the scene and he needs an operation.

Two couples, Don and Jean Collins and George and Brenda Felton are also injured. Don suffers spinal injuries and his best friend George feels guilty as he was having an affair with Jean. He tries to strangle her in Reception, Charlie has to break them up – Jean already has a broken jaw.

An old lady, Dodie, is trampled on, in the rush to get out. She has chest and pelvic injuries and dies in CRASH. Her husband, Gerry, who searches for her in the wreckage collapses with pains in his chest. In A&E, their son, Gordon visits him, as they try to prolong telling him of his wife’s death.

Ash and Charlie ponder Holby’s future as a trust hospital and Jimmy reveals to be leaving for a job in driving a van, for a boutique stall, he gets the job but there’s one slight problem – he has to learn to drive!

* Don Collins – spinal injuries after being trapped in wreckage

* Dodie Mitchell – old lady, dies after being crushed in the crash

* Man – chair gone into his leg

Charlie (in car on way to Beth’s party) : I mean the way they try and con us, low redundancies, early retirement, re..

Charlie : Ah! That’s the way to the best possible health service, isn’t it, what kind of mugs do they take us for?

Trish : You still don’t know do you? Your bloody meeting, you’ve been on and on about it ever since we got in the car.

Charlie : Do you want to go to bed?

Charlie : Your home, by yourself? (she nods)

* Ozzy the anaesthetist has a drink poured over him by an irate woman at the party.

* Aeroplane is a ‘Pathfinder’ make.