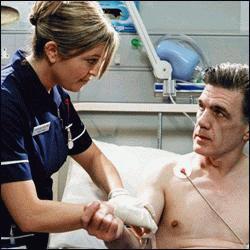 Then a patient called May Warner is brought up from the ED with a fractured hip and broken leg after climbing a step ladder that that she had slipped off of while putting some pictures up at her home. She has osteoparosis which means her bones aren’t as strong as other people’s might be. She gets taken up to theatre where some smallish bloodclots are removed which were caused by the fall she had, had. She is then brought back onto the ward, after a while Ric comes up to check on her and says her leg is warming up again which means she should now be ok and he would be back to check on her tomorrow.

After that a patient called Denise Sharpe is brought in with suspected appendicitis who at the time is halfway through a course of IVF treatment. After running a few tests it is then said that she has a ovarian mass (abscess) then the infection from it gets worse so she has to get rushed into theatre where she is operated on and one of her ovaries removed which means she definitely now will have no chance of having kids. Her husband is called Joe Sharpe.

There is also another patient called Martine Holbeck who is in for a heart operation although has been told her recovery chances won’t be as good unless she stops smoking which she then points out to Ed her patch which she has for minimising the cravings for a cigarette/nicotine.

Near the beginning of the episode one of Rosie’s kids are drinking some orange juice commenting that it tastes funny, Rosie then tries it and realies that it is off because it is out of date. Then Mubbs is caught short when having a shower as Rosie and one of her daughters pass by to get something. At the end of the episode after Mubbs telling Rosie he didn’t think her kids would ever accept him they are seen walking out of the hospital together as they go off home.

Ed has got George (his dad) a job working up in the hospital cafeteria his boss immediactely gets him running round doing jobs then George gets told off for slacking although its clear that he isn’t feeling too well. Then George goes up to the ward with some food, when he gets to Darwin he is stopped by Chrissie who reminds him not to give any of the patients any food or drink that have a nil by mouth sign next to their bed. She then asks where her bacon sandwich is, he then gives it to her.

A little later on in the episode Chrissie finds George collapsed as she asks one of the porters/nurses passing by to go and get a trolley to take him back up to Darwin again to get him looked at. George makes a few attempts at saying that he is fine and needs to leave although Chrissie doesn’t have any of it and tells him he needs to stay. George then says his surname is Hamillton after reading that on a nearby packet of something not wanting people to know his real name. Later on he tells Chrissie that he is Ed’s father then Chrissie says she knows all about it, about how George had ended up in prison because he had been protecting Ed who would have most likely got sent to prison instead for GBH although it had been in self-defence he had done it in the first place.

Later on Chrissie finds Ed coming out of the canteen and says he should talk to his dad which Ed then does as he goes outside the hospital and finds George sitting on a bench just across from the entrance way although George still doesn’t tell him the full extent of his illness.

May Warner, a 65-year-old who needs surgery after fracturing her hip and breaking her leg

Denise Sharpen, a woman undergoing IVF who has an ovarian abscess and infection

Martine Holbeck is going to have a bypass, but dies on the table

George, Ed’s father, collapses due to heart problems, but insists he is fine

(Lisa and Jess are standing at the nurses station up on AAU).

Lisa: (Reads out-loud from what looks like a magazine or newspaper) When all those close to you may be slow on the up-take, persevere, they soon realise nothing in life is for free and therefore cough up immediately.

Jess: What are you on about? Its not your birthday today is it?

Lisa: No you dozy cow, your rent is due. I can’t believe we go through this every month.

Jess: Okay, I’ll go to the cash point during my lunch break although I’m going to hold some back until you fix the lock on the bathroom door, dad isn’t happy.

Lisa: I’d never of guessed. In between whinging and moaning he didn’t mention when he was going to pay did he?

(Jess Walks off to see to a patient that had just come in).

George is sat on a bench outside the hospital, George comes out and walks over to him before sitting down next to him).

Ed: Are you alright? I came to look for you but you’d gone.George: (Nods) I know you really wanted us to work out but it wasn’t for me, I chucked it but I’ve had a word with my probation officer and he is going to try and get my old job back for me.

George: It’s for the best. I don’t want to be a burden.

Ed: Your not. Well, when were you gonna tell me how ill you are?

George: I had a bit of a dizzy spell. Look, pushing that trolley around all day. I told Chrissie not to tell you.

Ed: She seemed a bit concerned, didn’t say why but why would she be concerned if it wasn’t serious.

George: I’m fine, I just got out. Things are a bit strange, and well, I’m a bit stressed, thats all.

Ed: You know I’ll never be able to make up for what you done for me.

George: You don’t have to. If you could turn the clock back and do it again, I’m proud of you, who you are, when I saw you there today, with that patient, that was enough. If I hadn’t taken the blame..

Ed: (Hugs him) You are alright though aren’t you.

S6 E17 (27 Jan 04) : Forgive and Forget by Susan Wilkins Episode Summary The episode starts with Lisa being accosted by an anxious woman...

‘Inside Out’ : Diane’s childminder calls in sick, so she is forced to take baby Jack to work with her. Although Connie warms to...