Tricia is over the moon after her night with Carlos but worries that he does not feel the same way about her. All day she annoys Chrissie with asking her if she looks alright, wanting to be sure she is at her best for Carlos. Her fears are confirmed when she tells him she’s in love with him but he does not respond. Her timing is not the best: only a while earlier Carlos has had a conversation about Connie (and women in general) in theatre with Will and Ric where he says that the biggest mistake a man can ever do is to tell a woman he loves her, because then she will take the control. He also tells Will to stand up against Connie and later, when Connie tells Will off for doing a procedure without asking her, he tells her that he did not need her help and that Connie had said that he should get her only if she was needed.

Diane is struggling to adjust to living with Owen and baby Jack and grows increasingly tired and irritable. Owen is late for work after trying to make arrangements for the christening. Diane is annoyed when she finds out about it as she thought they were going to wait a little longer before setting the date. She also feels that she does not have any time for herself. However, after having talked to Ric and him having told her to try to put things into perspective, she makes up with Owen and asks Ric to be the baby’s godfather.

Reza is not in Zubin’s good books and Zubin obviously finds it hard to see Reza and Jess together. He takes his bad mood out on Reza when Reza makes a mistake in theatre, which results in Darren Baxter, who has internal bleeds after an RTA, waking up during surgery. He tells Jess he is finding the situation hard to deal with but, when she asks him about his feelings for her, he clams up. Jess tells him that at least Reza tells her what his feelings are and when she also finds out that Zubin has made Reza’s day miserable, she decides to go out with him after work. Later, Zubin realises what is important when Mark Dupoint, a patient of his who decides to refuse any further treatment, dies while talking to Zubin about love and asking him about his late wife. Zubin tries to tell Jess how much he cares about her but she says he is too late and leaves to go on her d! ate with Reza.

The department is busy as six people who have been involved in a bad RTA are brought in, two having died already on the scene. One of the vehicles involved is a truck carrying chemicals and the French driver Mark Dupont is badly burnt because of the chemicals. After being in theatre where an injury to the heart is repaired, Zubin realises that he has wide spread lung damage and that not much is possible to be done about it. The one causing of the accident, however, turns out to be Rebecca Turner, who is upset because of her husband having an affair and, under the influence of drugs, she makes a desperate move and intentionally crashes her car into another car carrying her husband and his girlfriend Chloe. Involved in the accident are also Jade and Adam Hilditch. Jade is heavily pregnant and soon goes into labour, which makes it hard for Adam to stay in bed even though he has internal injuries. Eventually Diane and Owen talk him into going into surgery while Jade needs a ceasarian. When Adam wakes up he finds out that he has got a daughter – but that her wife died during labour.

Mark Dupont, the driver of a chemical truck involved in an RTA, wide spread lung damage from inhaling the chemicals

Rebecca Turner, Darren’s wife, under the influence of drugs, which make her arrest

Ric: Truck load with chemicals colliding with three cars. Two fatalities. This is Darren Baxter, he’s the first of six arriving from the ED. Where’s your young admirer?

Ric: Reza? Zubin’s looking for him, doesn’t seem too pleased.

Reza: Don’t worry prof, I’ll have good care of her. See you outside, yeah?

[Jess looks at him and walks away. Someone bleeps Zubin, who slowly walks away, watching a nurse covering Mark Dupont while he walks]

In this article:Carol-Ann Docherty, HC Series 6 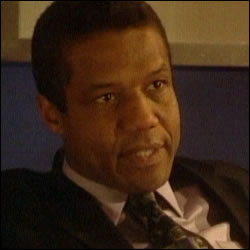 S6 E16 (20 Jan 04) : The Buck Stops Here by Paul Coates Episode Summary Karen Claymore and her young son Jake have been in...

Episode Summary Although he does not regret what he did to save his father, Ed has scared the living daylights out of himself by...

Episode Summary ‘Holding On’ : Diane’s pregnant sister, Joanna, is still in intensive care, as the medical drama continues. Owen delivers the baby by...