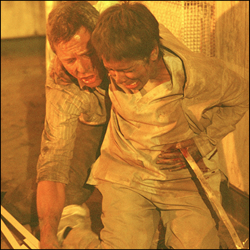 The episode opens with explosions ripping through the building and fire-fighters struggling to contain the blaze. An emergency tent has been set up outside to deal with the casualties. As Harry and Connie are still inside the building Ric is now in charge of the operation.

Harry and Connie are on the fifth floor operating on Zoe, unaware of what has happened to the building. Ric radios Harry to tell them to evacuate. However, Frank grabs the radio, insisting they continue the operation. It smashes to the ground meaning they have lost all contact with the outside world. Harry talks Frank into letting the non-urgent staff leave and get to safety. Connie’s partner Alistair (the Consultant Cardiac Surgeon from series 4) opts to leave so Harry has to take over and operate with Connie. Harry jokes that he has not done a heart operation for 15 years but will learn from Connie.

Ric tells the fire-fighters which departments are on which floors. They tell him they will get to the isolation room last as they must wait for a specialist team to evacuate those patients – Ric agrees not knowing that Luke is in there.

Jason leaves Bex unconscious and smashes the glass drugs cabinet. Jim and Rosie are nearby and hear the smash. They find Jason who says he is there alone; they all go off together, unaware that Bex is trapped beneath the debris. Later, Jason tries to steal the baby’s drugs from the medical bag, Jim sees the track marks on his arms and realises he is a junkie. They fight and Jason runs off.

Connie and Harry continue the heart transplant by torchlight. The battery pack is low and they hear several large explosions. They are oblivious to how bad the situation is but know they are running out of time.

Ric finds Alistair being treated outside. He tells Ric that he had tried to escape from the fifth floor but had been blown out of the window by the explosion.

Rosie and Jim are trapped, with debris falling on them and smoke pouring through the building. Rosie and Jim climb the lift shaft to escape, they talk about their experiences of life and love and share a moment. The couple hear fire-fighters above them and they call out for help. The fire-fighters throw a rope down for the baby and pull him to safety. The fire reaches Rosie and Jim, fire-fighters tell them they must get away from the lift shaft. They climb up a floor as debris falls on them and explosions go off. Rosie falls and is impaled on a piece of debris. She is in agony and cannot walk, Jim tells Rosie he will go and get help, she begs him not to leave but he promises he will come back.

Shirley is handed the baby and she is overjoyed he is alive. Mubbs questions the fire-fighters about Rosie, they tell him that they did not get to her in time – he is distraught.

Jason goes into the isolation room on the fifth floor. He tells Luke he is in bad pain and needs drugs. Jim finds the isolation room and asks for drugs for Rosie. Jason tries to run off with the drugs, Bex’s pass falls out of his pocket. Luke grabs him and demands to know where she is, he tells her she is dead. Jim takes the drugs to Rosie.

Fire-fighters find Bex under the debris and carry her to safety, she is in shock and tells them she thought she was going to die.

Connie tells the remaining staff to go to safety and finishes operating on Zoe with Harry. Still unconscious after major surgery, they carry her on a stretcher and go with her parents to the isolation room. Jim and Rosie also find their way there. Ric radios Connie on Luke’s radio and tells her they have 15 minutes to escape.

Outside Alistair knows he is dying, he tells Ric he is a coward for leaving Connie and the others to save himself. Donna is struggling with a patient next to him and Alistair talks her through a complicated medical procedure. Donna saves his life and goes to thank Alistair but he has already passed away.

Ric is now determined that no-one else will die and goes over the building plans with the fire-fighters. He finds a maintenance corridor on the map and instructs Connie on how to find it. Luke goes to get Chris but he has already died, he takes another patient, Eddie from the isolation room. As they are escaping flames burst into the room, they all rush into the corridor. Ric continues to give instructions and tells them to look for a bridge. In the turmoil they lose radio contact with Ric. Outside Josh goes up on a crane with the fire-fighters, waiting to pull everyone to safety.

One by one the group cross the bridge. Rosie is in excruciating pain and Jim stays with her to re-dress the wound and to give her more morphine. He tells Connie and the others to go whilst he looks after Rosie. She is grateful and tells him she will never forget that he came back for her. Harry comes back to help Jim with Rosie. They both aid her passage across the bridge, flames licking beneath them as they struggle across. Suddenly Jason pushes his way past, causing a section of the bridge to collapse, he falls to his death. Rosie and Jim are left hanging off the bridge, both desperately clinging on to Harry. Harry tells Jim he cannot hold them both for much longer – Jim courageously lets go and falls to his death.