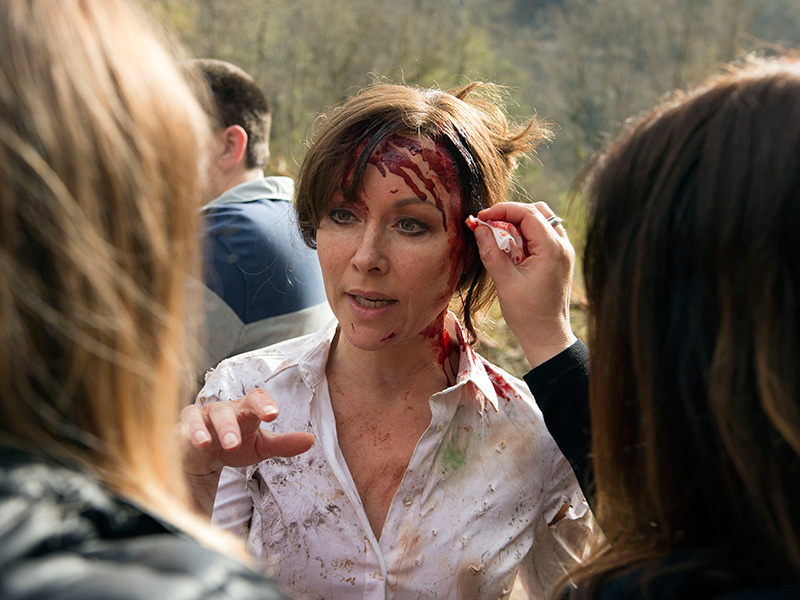 Viewers are desperate to find out the fate of Connie and her daughter Grace, after the Series 30 finale ended with their car crashing down a ravine.

So Amanda, remind us what happened at the end of the last series?

Grace has found out that Connie and Jacob want to be together again and has finally agreed to it. Meanwhile Grace had befriended Carmel but when she has an accident on the trampoline, Grace runs home to get Connie. When Carmel gets to hospital, we discover she has cuts and bruises and Social Services are eventually called when it is discovered that Carmel has been self harming because of the psychological abuse from her mother, Steph.

This causes Steph to take revenge on Connie. She is furious and wants to speak to Connie but Connie doesn’t want the confrontation. She takes a scenic route but as Steph chases her down, Connie clips her car and goes over the ravine!

We’ve then had this long gap which has really frustrated people, literally a cliff hanger!  And then you come back to us with the result that Connie has been thrown from the car and all she can see is Grace’s pink trainer by the flaming car!

I spent a week crawling across the bottom of a ravine, which was really traumatic! Some people can act the pain, the sadness  and anxiety and I think you’d have to be a genius to fake that. By the end of the week, filming Connie’s anguish, being upset for 12 hours daily– I was exhausted by the end of it! You do get an emotional hangover afterwards.

Has it been good to show a more vulnerable side of Connie for a change?

Well that is what’s so brilliant; that this is so un-Connie. I think we can only do that with Connie because at first the shutters come down with her and she’s the uber bitch but then because of Grace being her Achilles heel, we get to see the more softer, vulnerable side of her.

She’s the only person that can make her vulnerable but we’ve never seen her completely break down and during this you do see all those raw, uncensored emotions from her.

It’s interesting to be able to play that, no heels on that day… I guess this is what happens when Connie takes her shoes off! 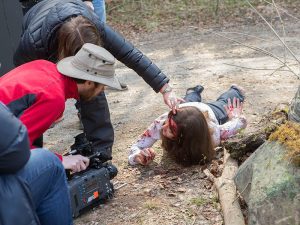 Have you done many of your own stunts for these episodes?

I did all of the driving sequences in the series finale – I’m a bit of a speed freak so I enjoyed all the chase scenes! We then set up the car in the studio, with a green screen and tipped it. It’s fantastic what they do and you get a sense of what it must be like.

With the upcoming episode which involves a helicopter crash, the idea was to do as much as possible for real. There’s very little CGI and I applaud the crew for that.

What’s your take on Connie and Jacob’s relationship?

I do like her being with Jacob and I always said that if Connie fell in love, it would have to be with someone that could match her and that wouldn’t be intimidated by her and she respects that.

But what happens in this episode would put a real strain on a relationship.

You are also going to be directing a future episode of Casualty, are you looking forward to that?

I can’t wait till I’m the other side of the camera so I can put them all through their paces!