Actor Andrew Lewis will be a familiar face to viewers having appeared in HOLBY CITY as semi-regular anaesthetist Paul Rose – one of the longest serving current characters on the show. Andrew kindly talks to holby.tv about his role…

You’ve been a semi-regular character in HOLBY CITY for a number of years, do you enjoy playing your role?

I actually first started seven years ago in Series 3. I really enjoy playing Paul Rose, not just for the knowledge I gain playing a doctor but also as he is becoming a bit more mischevious and funny.

Playing an anaesthetist, did you have to do any research or shadowing in a real-hospital for the part?

I have had the privilege of visiting two different hospitals and standing alongside the anaesthetists learning about their role during any operations and what equipment and machines are vital to that end. It was absolutely fascinating and an awesome experience.

Do you find it hard saying/ learning medical terms on the show?

Unfortunately I spent a long time in hospital myself as a patient and became very familiar with the way doctors and nurses talk about their world, so it wasn’t as difficult as I thought it was going to be.

Are you at all squeamish in real life?

The day before I went to see my first real open heart surgery operation, I wasn’t sure if I’d faint on seeing inside another person’s body, but I didn’t and infact found the whole experience incredible.

For part of the series, you were in a wheelchair, however it was never explained to viewers onscreen when you appeared from 2006 without it. Can you enlighten us?

I was involved in a motorbike accident in 2001 and spent the next four years in a wheelchair whilst my leg was rebuilt and then during the rehabilitation process. Luckily I can now walk again and asked if I could come back out of my wheelchair. As it had been a year since I was last seen, the programme producers mirrored Paul Rose’s recovery to mine. It was decided not to explain it so as not to trivialise the condition of those who do have to spend their lives in a wheelchair and also because we don’t always know why someone is in a wheelchair. There was a storyline which attempted to allude to Paul Rose being in physiotherapy but it didn’t make it to air.

What have been some of your favourite Holby storylines to be involved in?

I really enjoyed the episode where Tom Campbell-Gore tricked Paul Rose into performing an operation without a general anaesthetic, believing that Zubin Khan, his boss, knew it was going ahead. I also enjoyed the recent storyline when I appeared in a tuxedo – I thought it was the beginning of a new line in anaesthetist-wear!

If your character could be paired up with any other character on the show, who would you choose?

That’s quite a tricky question but I think Paul has a soft spot for Connie Beauchamp.

Who are your closest friends on Set? Do you get on well with other cast members?

The whole cast and crew are like a family. As I tend to work mainly in theatre settings, I obviously see more of the surgeons and registrars in the show. But I am lucky enough to get on with everyone in the cast and crew.

Have there been any funny moments on Set that you  can share with us?

A lot of what are funny moments don’t always sound as  funny when you repeat them. It’s usually fits of the  giggles or something like that when we make mistakes  and cannot say it without laughing. But when the person  playing the patient in theatre falls asleep and starts to snore whilst shooting, that is always very funny!

As well as working on HOLBY CITY, what other acting work have you done?

I have played a lot of doctors, in HOLBY CITY and Doctors, I have been in Waking the Dead, The Bill and earlier in my career worked in children’s TV too. I have done a lot of theatre, working for the RSC and many smaller theatre companies.

Have you always wanted to be an actor?

I can remember at the age of six getting up infront of my class and pretending to be a cowboy waking up and getting dressed, all in mime. I did loads of school plays but wanted to be a farmer. It was only when I left University and did some street theatre at the Edinburgh Festival that I thought I’d like to do this all the time!

I have worked with some of my favourite actors; Denis Lawson and Art Malik. I also admire George Clooney, Judi Dench, Michael Gambon and more recently Jet Li (I am a big martial arts fan). 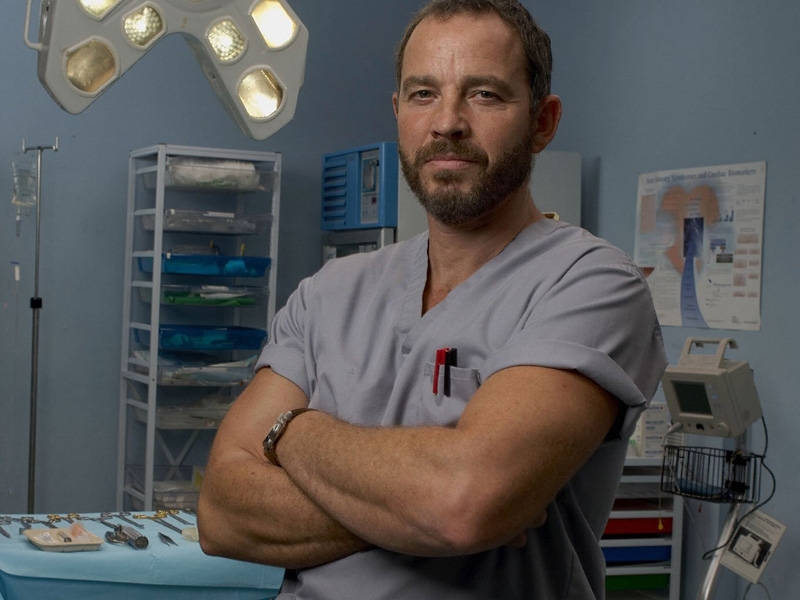