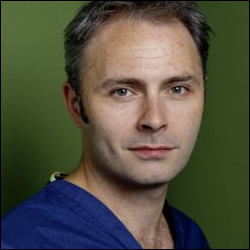 (as he is being taken away by police, he says to Charlie) Charlie – the people’s hero!

On the outside, Bruno appears to be a clever and capable nurse, however when he arrives in S20 E1, it’s clear him and Maggie have a history, having previously worked together at Bradford Royal Infirmary. It’s unclear why there’s so much tension between them, but Bruno sets out to make trouble for Maggie when her daughter is brought in injured after an explosion at a block off flats. Bruno decides to call the prison, where Maggie’s estranged husband has been despite Maggie’s claims to everyone that he’s dead and opens up a can of worms when he’s given leave from prison to visit. Bruno seems to enjoy the trouble he’s caused. Despite his amoral behaviour and his his expert way of delegating work on to other people, his colleagues warm to him, probably due to his great wit and fun nature. In S20 E4, Bruno and Kelsey stalk the department with a ‘sex survey’, asking the staff how many partners they’ve had.