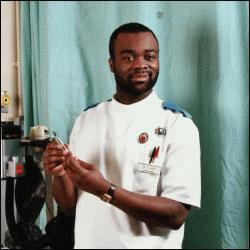 Charlie : Do either of you believe in the ephisy of prayer?

Student Nurses Cyril James and Karen OMalley join the A&E wards from S2 E2 – and already we see Cyril is quite keen on Karen, when he gets jealous over her relationship with Charlie. Next episode in S2 E3, Charlie has spent the night with Karen and when Cyril calls for her in the morning to play squash, Charlie slips out the back. As they play squash, in another court, a man suffers a heart attack. Cyril and Karen attempt CPR, but cannot revive him, and he dies. In S2 E6, Susie has some modelling snaps published without her consent. Cyril, for a joke, decides to make copies and send them to the staff. In S2 E7, Cyril treats a man with a sprained ankle and is sick, he is not happy at being treated by a Student Nurse. In S2 E8, Cyril and Karen are both revising for their exams, Cyril thinks it will be a breeze, but Karen is nervous. During the shift, a footballing friend of Cyril’s, Windy Gale, comes in complaining of chest and leg pains, after he twisted his ankle in a game the previous week. Cyril doesn’t think it’s serious, but Mary discovers he has a deep vein thrombosis in his leg. An ex-Army officer, who has a burnt hand is also treated by Cyril. At first he is reluctant, but is later pleased to have been treated by him. Next episode in S2 E9, we learn Cyril has passed his exams. In S2 E10, Cyril is insulted by a group of skin heads who cause havoc in the department. In S2 E12, Cyril wins a bet with Charlie, Kuba and Keith, that he could persuade antisocial Mary to have breakfast with him. Mary realises it’s a bet and chooses an expensive hotel and orders lots of food. In S2 E13, Cyril and Charlie have to lift a large man to a cubicle, after he drops a bowling ball on his foot. In S2 E15, Cyril is getting hassled by a woman called Jemima, who he met at a party, but is avoiding her.

In S3 E1, Cyril has been working in theatre at Queens hospital for six months. He visits Holby A&E, and asks Charlie’s opinion on him returning to his job – Charlie isn’t keen, believing he should apply for something better, but he’s already got the job. In his first shift back in S3 E2, a pickpocketer with chest pains is brought in by two police officers. David believes he is faking it and discharges him, Cyril disagrees with his diagnosis and is proved right when the man returns after suffering a stroke and dies. In S3 E6, Cyril finds two of David’s hockey sticks in the staffroom, he and Charlie play with them in the corridor, with an ashtray as a puck. David is furious, but then challenges Cyril to a game. In S3 E8, Kiran and Alison plan to move in with Cyril, after their nursing flat has been burgled. And in S3 E10, Cyril has trouble with walkabout punk, Tony, who has a cut head and chest infection – he is also starving, so Cyril gets him some food. Cyril and Alison also plan their house warming party.

In S4 E1, Cyril and Lucy go to the scene of a motorway accident. He’s also applied for a job in ITU, but finds out next episode he has lost out to another nurse and becomes irate with Charlie. He later treats a woman who has a gashed forehead. She is a nurse and tells him of the opportunities in the USA, Cyril is tempted but eventually decides not to go. In S4 E5, Cyril get a 78 year old man to admit he caught his VD from a Meals and Wheels lady. In S4 E6, [ID 368]Julie[/ID] teases Cyril for joining a dating agency. In S4 E9, a teenage prostitute, Dawn, is brought in after being pushed out of a car. She makes a nuisance of herself. After stitching her, Cyril is advised to call Social Services on her, but it’s too late as she gets into a car with another customer. In his last episode in S4 E12, the team are kept busy after an explosion in the city centre. Among the patients, Cyril treats a shoplifter as her bag is full of jewellry.