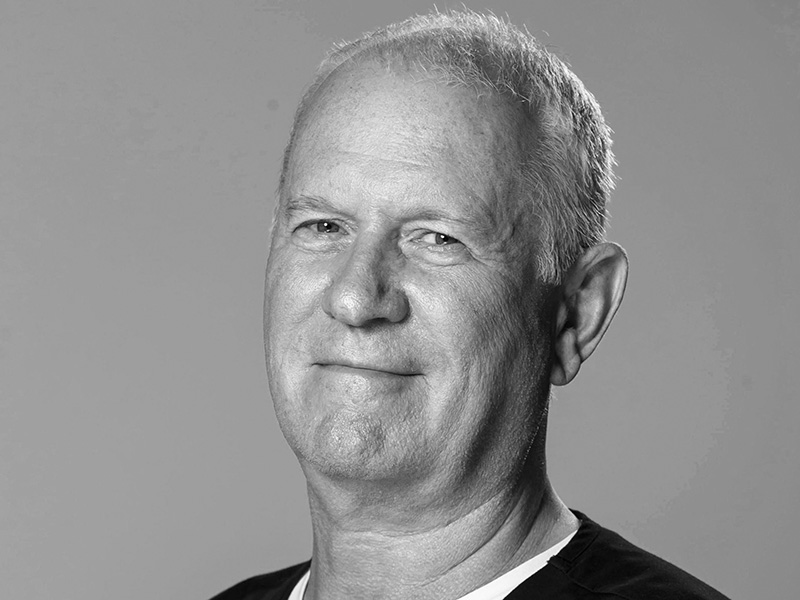 FAMILY : A twin sister, Elaine, who lives in Cornwall. His parents live in Cornwall, his father is a sea-going engineer turned mechanic.

PARTNER : Actress Dee Sadler, who has guested in two episodes of CASUALTY – they met on Set, as she played a pot-holer who got trapped in a cave, ‘I always say that instead of knocking my woman on the head and dragging her into a cave in the traditional manner, I got to drag mine out.’

CHILDREN : Jack (from a previous marriage to theatre director/writer Christine) and Charlie (who has also appeared in CASUALTY as Duffy’s baby son).

LIVES : In a rented flat in Bristol (he also has a recording studio at his home) and also owns a house in Brixton, South London.

PREVIOUS JOBS : Rode a toy train for a children’s department store when he was 15, ‘I was nauseated from the ride by the end of every working day.’.

BEFORE CASUALTY : As children, Derek and his sister, were a close harmony act, in native Belfast. They had a record deal with Parlaphone Records and did their first gig, aged 10. They recorded four albums and 15 EP’s. He then joined various rock groups, before acting in repertory theatre (Perth, Kidderminster, Newcastle, Chester, Ludlow Festival and Birmingham Rep) and fringe theatre (with Recreation Ground, West London Theatre Workshop and Belt & Braces).

ON HIS CASUALTY AUDITION : He auditioned for the part of Charlie, just weeks after his mother had undergone a mastectomy, ‘I was really quite rude with the casting director, who insisted that CASUALTY was going to be a really streetwise, warts-and-all look at the medical profession. ‘Nurses ain’t no angels’ was his catchphrase, and I’m afraid I lost it and shouted ‘Yes they bloody well are!’ in the middle of the interview.’

SIMILARITIES WITH CHARLIE : ‘You could say I look like him, but not really – television puts weight on you! I have played Charlie for so long now that it is difficult to know what bits of me script writers have included.’

CHARLIE’S BEST AND WORST TRAITS : ‘He has this amazing ability to forget about everything else that is going on in his life when it comes to the job. From day one he has had an absolute focus. But he does have a tendency to want everyone to win. Sometimes he spends too much time trying to hear everybody’s side of the story, instead of making a bold decision.’

DESCRIBE CHARLIE IN FIVE WORDS : ‘A man of the world – because he’s seen it all and hasn’t lost his sense of curiosity.’

ON HIS PART AS CHARLIE : ‘You have got to get involved on an emotional level. You have to believe in the situation, otherwise how is the viewer going to believe what you are doing?’

ON BEING THE LAST SOLE REMAINING CHARACTER : ‘I’m the last green bottle on the wall – but I have no regrets, it’s better than Tesco’s! The timing of CASUALTY was really fortunate for me. I already had a vast repertoire and I can look at other opportunities and think I’ve already done that.’

ON HIS CASUALTY JOB : ‘I’m still here because I love the work I do. But I don’t take it for granted and always see it as a casual job which may end.’

ON SEX SCENES : ‘No you don’t see any bonking, just the cigarette afterwards! I’m quite relieved, I don’t think my bum would live up to someone’s like Sean Bean’s.’

ON BABY BIRTH SCENES : ‘It was a real tear jerker for me. All the feelings I had when I saw my own children came flooding back. I think it looks brilliant.’

TO WHICH COLLEAGUE CHARLIE WOULD GIVE THE KISS OF LIFE : ‘Jack’ says Derek with a wicked grin, ‘He would never be able to show his face in the Emergency Department again!’

ON A ROMANCE BETWEEN CHARLIE & DUFFY : ‘I hope the producers have enough sense not to do that because it would actually kill an element of their relationship that’s very important. Because when people become an item they kind of stop talking to each other on screen. Or they have to fall out a lot, or be lovey dovey a lot. Having a relationship at work that is just friendship is very good for the fabric of the place.’

REAL LIFE CASUALTY INCIDENT : ‘I was once taken into A&E Bristol Royal Infirmary. It was bizarre! It was in the early days of CASUALTY, I was working 14 hour days and living in a very damp basement I couldn’t get my breath so my other half phoned for an ambulance. I was in a bad way and had to be taken in on a wheelchair. They put me on a nebuliser for about an hour and that did the trick. When they saw I had recovered, someone brought in this huge 12 lead ECG machine used for major heart problems. It goes all over your body and is quite scary. I thought ‘what the hell’s going on here’ They all thought it was very funny, but it scared me to death at the time. The staff recognised me from the series and thought they’d give me a playful fright!.’

IF HE HADN’T BECOME AN ACTOR : ‘I’d probably be a carpenter because I’ve always been keen on working with wood, and I like the fact you get to see an end result to your work.’

BEST PIECE OF ADVICE GIVEN : ‘My Dad told me ‘It doesn’t help to worry’ which is very true. He thought I was greatly concerned with my progress as a young actor and he’d say, ‘There are few parts for bald actors, so there’s no point worrying until your hair falls out!’

HEALTH ADVICE HE IGNORES : ‘I can’t resist temptation. When I get on Set in the mornings and the smell of those fried breakfasts hits my nostrils – I’m a goner!’

HOW HE RELAXES & KEEPS IN SHAPE : ‘I have a regular routine of swimming three times a week and going for long walks for atleast an hour.. you need those kind of solo activities to let your mind go random. I love the people factor of this job but you do have to recognise your limitations and the demands you place on yourself. You need to get back inside your own head in between.’

FAVE FOOD : ‘It has always been beans on toast; no frills, no additions like Worcestershire sauce, or cheese – just straight from the tin.’

WORST TV PROGRAMME : ‘Ready Steady Cook and all the other cookery game shows, which prove a real imposition – I get sucked in and have to see them through to the end.’

BOOKS : Appears in ‘Swings & Roundabouts’ by Lynda Del Sasso, ‘CASUALTY : The Inside Story’ by Hilary Kingsley, ‘CASUALTY : Behind the Scenes’ by Rachel Silver and ‘Charlie’s Casenotes’ by Hugh Millar.

* Derek has a neurological condition called dystonia which causes his neck and head to spasm. Left untreated for many years, Derek now has Botox treatment to combat the problem and has become a patron for the Dystonia Society, to help raise awareness.