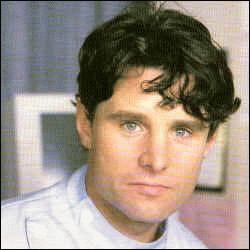 (to Norma) So are they doing anything to boost security?

Gay Ken Hodges starts work, just after the Holby Hospital fire, as Clinical Nurse Specialist. He had already gets Ash’s back up – as he also applied for the position and starts getting mystery phone calls at work. In S8 E2, Ash gives Ken the cold shoulder because of Ken’s position. Ken confides in Duffy and tells her that he’s gay. Duffy assures him it’s not the reason behind Ash’s behaviour, and promises to keep it a secret. After a busy shift due to a string of accidents causes by the windy weather conditions, the team are drained and Charlie offers to buy Ken breakfast. In S8 E3, Charlie questions Ash’s attitude, as he’s still cut up about Ken getting the job. In S8 E4, Ken’s job is under threat and Charlie meets with the Chief Executive. Meanwhile Ken’s boyfriend, Colin, turns up and apologises for the embarassing things he has written in a letter Ken hasn’t seen. Duffy asks Charlie is he knows Ken is gay. He says he does. An old man is brought in after bumping his head on a grate. On his way to x-ray, he attacks Mie. Ken gets the man to open up, and tells him his story of how he was a prisoner of war in Burma, and was captured by the Japanese. A story he can never forget. Ken believes he is suffering from malnutrition and calls for the man’s old colleagues at the British Legion for moral support. In S8 E5, Ken gives Charlie a lift to work and invites him to spend the night at his place. Duffy becomes suspicious of their friendship and blanks Ken out. In S8 E6, Ken cancels a weekend away, booked by Charlie. Charlie asks for an explanation. Ken says he must be stupid if he hadn’t noticed the way he felt about him. Charlie is shocked as he had no idea Ken felt this way towards him. Duffy says she thought it was what Charlie wanted – as none of his female relationships worked out. In S8 E7, Manager [ID 363]Mark[/ID] tells Charlie that Ken’s contract is not going to be renewed, leaving Charlie to tell him the news. Charlie and Mike break the news to Ken that he’s been sacked. Ken says he was expecting it and that he has something else lined up. Ash hears about Ken’s dismissal and apologises to Ken for his behaviour towards him in the past. Ken declines his offer for an after shift drink. Duffy asks Mike for the bottle of whisky she saw him with last week, she wants it for a farewell present for Ken. Mike tells her it’s in his filing cabinet under ‘w’. Duffy runs out into the car park after Ken with the whisky wrapped in a bandage and plasters. He doesn’t see her and speeds out of the hospital grounds in his car.