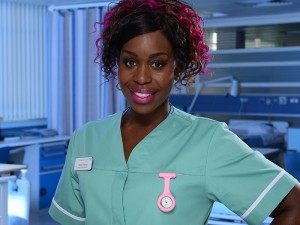 Noted for her role as Naomi in Eastenders, Petra talks to holby.tv about her new role on the medical drama and what’s in store…

How do we first meet Adele?

Adele walks up to the exterior of the hospital and there is lady with a burnt hand outside. She’s dressed very flamboyantly. But she deals with the patient, being very hands on and caring.

HCA’s are not medically trained so aren’t supposed to get stuck in in that sense, so Colette is not impressed that one she’s late and two that’s she’s trying to deal with this patient. I think Adele’s line back is ‘I’ve dealt with this in Ayia Napa!’

So that line tells us a bit about her background?

Yes, Adele used to be a holiday rep working in places such as Magaluf and Ayia Napa. All those fun places, dealing with lager louts! So she does have life experience of dealing with people.

What has brought her to Holby?

I think she wants a change of career to prove to her friends and family that’s she’s growing up. She wants to be taken seriously but I think at the beginning, even she is not sure herself if she can do it. There’s slight doubt I suppose because there is more at risk when you’re dealing with patients. It’s not quite the fun you would get as a holiday rep.

Adele is a bit out of her depth in that she’s got to be more controlled and not as outspoken; she blurts out whatever is on her mind! Her instinct is to just get stuck in and not wait for the medically trained professionals to make a decision and tell her what to do. She’s prepared to suffer the consequences later.

They have a good sisterly relationship. Coming from the same family, they are both quick with their mouth! Outside of work, everything is lovely but when it comes into the work setting that is where Adele has to readjust. She even calls Mo ‘Maureen’ in the first episode. She does find it difficult in the beginning, trying to find that balance of being sisters but at work, Mo is a doctor; it’s then when you get that clash.

From Mo’s point of view, she has to remind Adele that they are not at home and that she can’t talk to her like that in the work environment and that there are rules she needs to follow. Also with her being an ‘Effanga’, she’s got a lot to live up to.

Is Mo happy that she is there?

Initially she is not even aware that she is there, they kind of bump into eachother in the corridor! Adele didn’t tell Mo she was coming to Holby. She is happy but Mo sets her a challenge thinking she’s not going to last. This is a serious job and Adele is not a serious girl.

Is it nice for you to be working with Chizzy?

I was so pleased when I found out I got this job. I knew Chizzy before this because we did two plays together. So it was nice as I came into this job not feeling like the new girl. I felt so at ease and relaxed. My first scenes, it was like working with a mate.

I think it’s good to have a background story for Mo as well so we get to know more about her family and where they come from. She’s a doctor and Adele’s an HCA so there are some interesting stories to learn from what has happened. Is it that Adele is less educated or is it that she sacrificed certain things to allow Mo to flourish? 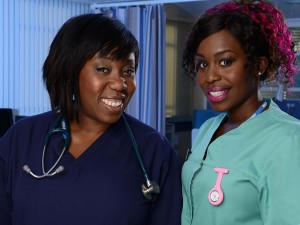 Is there much corpsing on Set?

I would say that it’s allowed as it brings a nice energy to the scene! It happens a lot, we do have a laugh. It’s so refreshing to be doing a job that you enjoy, I think you can tell watching the show that everyone gets on and are happy to be there. There’s good chemistry and also when you’ve got great directors that let you play but if you need reigning in they will do that too.

Who does Adele get on with?

Definitely Mary-Claire and she surprisingly gets on with Harry. Despite their class difference, they have good banter.

There’s also a nice moment between Adele and Guy in the first couple of episodes and also Colette. Her approach is very much that if you’re getting the results, it works but just don’t tell anyone! She understands Adele’s heart is in the right place but that she can teach her some things and be more subtle in her approach.

Anyone she clashes with?

She locks horns with Serena. I think she finds Adele’s approach unprofessional but she wins her over as Adele has sometimes been right, just has not followed the correct procedure.

So yes, there’s people she may frustrate but I think they all love her; they should do!

How did it feel getting this role, having worked previously on Eastenders?

It’s so nice to be working again on TV. After leaving Eastenders, I’d been doing loads of theatre. After doing such a big show, you hear about the curse of doing a soap or that you might get typecast. I was only in it for two years but people still remember me from that. For a while I did get scripts, for similar roles, which was fine but I wanted to make sure I wasn’t just getting seen for those parts and that I can do much more.

Being filmed in the same place as Eastenders, it’s so nice to be back. Even when I came in on my first day back, some of the security staff remembered me and some fans outside recognised me, which is lovely.

How did you find the publics’ reaction to your Eastenders character, Naomi?

I don’t know if the public took to my character well. I think people were a bit shocked about this change in Sonia – all of a sudden she changed her sexuality after being married to Martin. I got a lot of attention just for my sexuality, not much about my acting which can be frustrating but you have to work with what you’re given.

So it must be refreshing playing a character such as Adele?

I’m so excited about playing this character because I feel like she’s going to bring fireworks to Holby! She’s young and vibrant and is on the pulse of things that are going on. She has this cheeky side of her as well which I like.

She reminds us a bit of Donna Jackson, who had that mischievous spirit.

Funny, because I went up for that part! It took me ten years to get in but I’m here! From what I’ve heard viewers want young, fresh characters so I hope the public warm to her as much as I have. The last few months filming have been so much fun.

I think they will like her as she tells it like it is. She messes up and she says things that you shouldn’t say out loud. She’s charming and you can’t help but like her because she keeps putting her foot in it. We all know someone like that and it’s quite endearing.

Presumably, being Holby land, there will also be some drama for her along the way?

At the moment it’s been fun and games but there are the serious moments too with lessons learned or her being put in her place. It is layered so I’m sure we’ll have some serious stuff coming up for her. I know she has vices, so watch this space!

Do you think in future Adele may want train as a nurse?

At the moment there is talk of her training to be a nurse but I think she needs to start at this level to see if she can handle having a normal job and having that discipline; time management, dealing with patients and her bosses. Just getting back into the work environment is a challenge for her so maybe after that she’ll set herself bigger challenges. 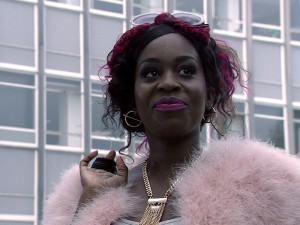 Is there much of you in Adele?

I think her happy go lucky character and nature is very much a part of how I like to lead my life.  Because what you put out, you get back. I like to be quite positive so in that sense yes. I’m probably not cut out for being an HCA at all because you have to clean up vomit but definitely her vibrant character, her love of life and wanting to party; she’s my younger self!

I was and so is my Mum. She’s a massive fan so she is super excited, more so than me! When I told her I got the job, she screamed. She also said she hoped they don’t put her together with Harry, as he’s a bit of a player!

What else would you like to do in your career?

I’ve got a 12 month contract and my loyalties are certainly with Holby at the moment but in future I would love to do more film. It’s a different skill that you need, working a different muscle. You would spend more time on one scene than you would if you were doing TV and I think that would take a lot of discipline, so I would enjoy that challenge. 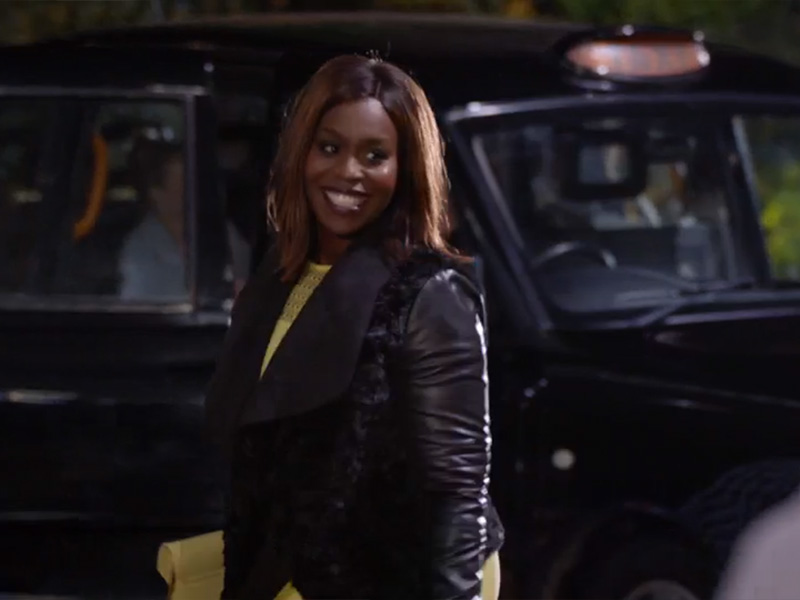 HOLBY CITY surprised us this week with a shock exit as actress Petra Letang left our screens. Petra has played nurse Adele Effanga for... 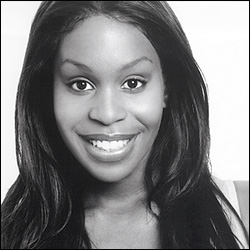