Daisha’s morning sickness is making her daily duties difficult and when Mark confronts her, thinking she’s been out drinking the night before, she has to tell him she’s pregnant. Daisha says she wants a termination but when she learns that she’s 25 weeks pregnant, she realises this is not a legal option. But Daisha is determined not to have the child and is intent on seeking illegal alternatives – much to Mark’s disbelief.

The Tan family have become a huge distraction for Linden and when Professor Adler arrives to oversee the move of the conjoined twins to London, Linden argues that they should stay at Holby with their parents. He seeks help from Ric and Connie, and Connie agrees to try to persuade Adler to perform the operation to separate the twins at Holby. But Jayne is not happy about Linden’s meddling – the procedure costs for the operation are something Holby could not afford.

Faye treats an asthma attack patient who makes her rethink her relationship with Joseph. She later talks to him about her worries of a future together without children of their own but Joseph reminds her that, if they do get married, Archie will become his son.

In this article:Debbie O'Malley, HC Series 10

Episode Summary Owen struggles to come to terms with his grieving daughter, Katie, and is too busy thinking about Chrissie to realise that she...

Episode Summary Chrissie is depressed about having to remove her facial bandage because of an infection. Chrissie shows Mark a letter from Stuart’s lawyers... 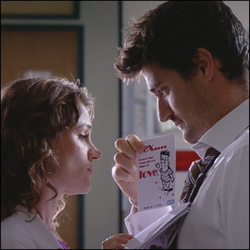